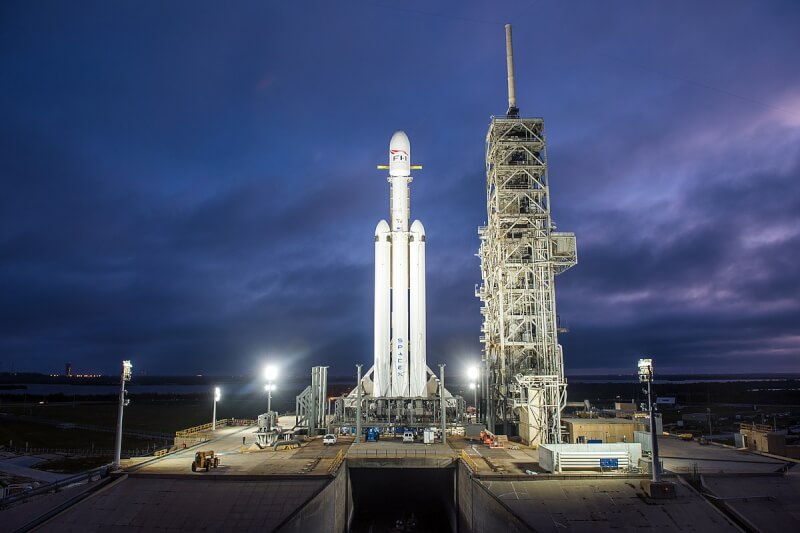 It has just been over a week since SpaceX celebrated the first anniversary of Falcon Heavy’s maiden flight. Now the word around is that the boosters of the rocket are about to light up again for its second flight ever. Also, this time the rocket will carry an actual satellite. Falcon heavy has faced tonnes of skepticism even after having proved its worth. This might be a really good time to prove the doubters wrong.

It is the most powerful rocket in the world, in terms of the weight of payload that it can lift. It was demo-launched for the first time on February 6th, 2018. The launch was lauded as one of the most magnificent launches in recent memory. With the launch, SpaceX proved that it could build a powerful rocket, launch it and recover the lower stages of its boosters.

SpaceX started out with a very tiny rocket compared to the F-Heavy. It was called Falcon 1. The Falcon 1 had only one engine, which is called the Merlin. It evolved into the Falcon 9 when 9 Merlin engines were used for the launch. The Falcon 9 is powerful enough for most payload launches. So much so that NASA resupplies the International Space Station with the Falcon 9. The Falcon has a reusable lower stage, which is landed back after being used, to reduce the cost per launch. Therefore, the boosters of F-Heavy are meant to land back after providing the escape velocity. Other countries and companies have relied upon Falcon 9 for their satellite launches. SpaceX now uses the Falcon 9 Block V, its latest version of Falcon 9, for its launches.

A Long Walk To Greatness

The idea behind the Falcon Heavy’s capabilities was fairly simple. SpaceX wanted to strap three Falcon 9 rockets together and build an ultra-heavy rocket with 27 Merlin engines. However, this simple idea turned into a nightmare as more stage separations meant more risk for the payload. The idea was put forth in 2011 and it was in 2018, that a demo was possible.

The First Launch : An Unusual Feat

The F-Heavy launched for the first time on February 6, 2018. The launch was one of the monumental moments for SpaceX. Elon Musk chose his cherry red Tesla Roadster as the dummy payload. The launch was successful for the most part. The launch was flawless. The separations of the three boosters were successful. The payload was deployed with David Bowie’s Life On Mars in the background. The side boosters landed simultaneously. Only the central booster couldn’t land properly. Nonetheless, the launch, the deployment, and the landings were phenomenal.

After a year of silence, the Merlin engines might rustle again in March with the launch of the Saudi satellite Arabsat-6A. Falcon Heavy is intended for heavy-lift and superheavy-lift missions. The Arabsat launch is actually a payload capabilities demo for the Falcon Heavy. The Arabsat could easily be launched with an F-9, but for the Falcon Heavy to be human-spaceflight-rated by NASA, it needs more launches. There will be more F-Heavy launches in the near future as SpaceX has a lunar mission coming soon.

SpaceX has been notorious with punctuality. So it will be no surprise if the launch is delayed further. Also, there has been some news recently that the Department of Defense of the USA wants to re-rate the F-Heavy in order to maintain safety for its payloads. Also, President Trump recently announced a national emergency, which could delay the launch.

In the near future, there are going to be more and more Falcon Heavy missions. The reason behind that is SpaceX is beginning the tests for its next venture, named Starship. Starship will eventually render the entire Falcon family of rockets redundant. So the scope for Falcon Heavy’s prosperity lies between now and the operation of Starship, whose goal is to colonize Mars. Given the urgency, Falcon Heavy has very limited time but very powerful specs to prove itself as the industry standard.

1 thought on “SpaceX To Launch Falcon Heavy In March?”