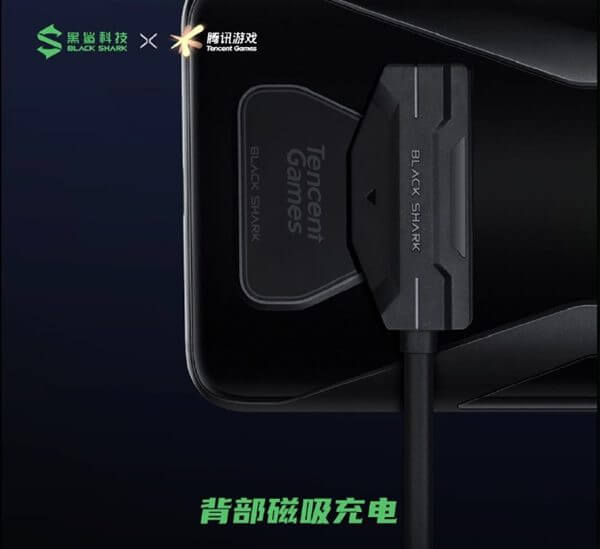 Above image is of the Black Shark 3, the images show the camera setup which is designed like the Triangle. Also, it confirms that the device will be coming with the triple camera setup. Also, the renders of the device leaked a few days ago is much similar to the image. Check out below:

As Black Shark has partnered with the Tencent Games to provide a new gaming experience without lags and problems. So, the Black Shark 3 comes with the new Magnet Charging. You will be able to continuously play games on the device because of the designing of Charging Port. The charging port is in the back, so when you start playing games and you will also be able to charge the device and it will also not make any problem for users. Check out the features below:

Here are the expected features by which the device will be coming:

The device will sport a larger 6.57-inch Super AMOLED display with 120Hz refresh rate and it will also feature 240Hz Touch Sampling. So, the device is likely to have 2400×1080 pixels of resolutions. Black Shark 3 will not come with any notch but it is not confirmed till. Also, the device will come with 4720mAh of battery and will support 65W Fast Charging.

Black Shark 3 is confirmed to sport triple camera setup. Also, we are expecting that it will come with 64MP primary sensor, 16MP ultra-wide sensor and 8MP telephoto sensor. The device will also sport 32MP selfie camera.

Here are the expected specs for the Black Shark 3:

The device is going to launch on the 3rd of March in China. As there is no official confirmation for the India launch but we are expecting that it will launch before April 2020. The Black Shark 3 Pro will also launch along with it.