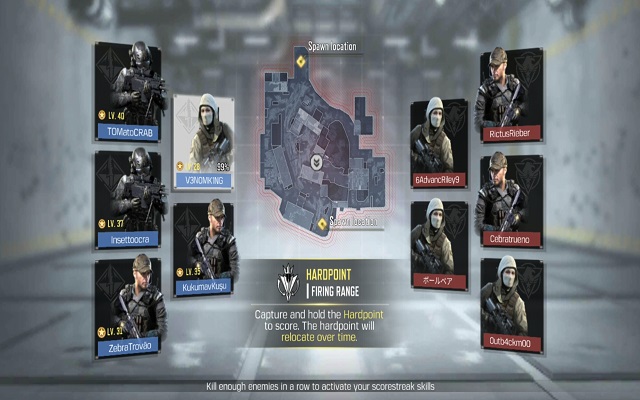 iSpeech
Hard point is a one of the game modes in Call of Duty Mobile. This can be played in the multiplayer option of the game, and is different from the other modes. Every mode in the multiplayer option of Call of Duty needs a different approach and game plan. This one comes with an objective and has an elaborate point system. The mode might seem a little challenging to understand initially, but with constant practise you can ace it. This Call of Duty Mobile guide will let you understand everything about Hard Point mode, and how you can be the top performer from your team.

What is Hard Point?

The primary objective in the mode is to hold the marked point on the map and defend it till the timer runs out on that area. The Hardpoint on the map will be indicated with blue if your team is defending it and red if it is being defended by the enemy team.

This makes all the players aware of the domination on the Hardpoint, and they can devise an attack plan according to that. The Hardpoint will show half of both the colours, if the Hardpoint is being defended by both the teams, and they are fighting there. It is different because this mode does not depend on the kills, and it also needs the most number of points to win the match. The winning team needs to have a score of 150, and it is also one of the longest modes in the game. Hardpoint is a 5v5 mode, and it is very important to know the intricacies of the mode. No matter how many fights take place on the Hardpoint, whoever stays there when the timer stops, wins the point.

Hardpoint is a tough mode and a lot of players struggle, but these tips will help you get better in this mode and in this game.

The map plays a major role in Call of Duty: Mobile, and it is exceptionally important to know the map when playing Hardpoint. Rushing towards the designated Hardpoint aimlessly is not a very wise thing to do. If the point is being defended by the enemies, they can take you out and kill you. This is why you need to know the ways around the point, knowing the map is crucial for this.

You can flank the enemy, backstab the enemy, or just get on a higher ground and attack them from above. This will surprise the enemy, and you will have the chance to pick up multiple kills and combinations. Furthermore, it will help you regain the position of the point and defend it for your team. This will give you an upper hand in the match and help you win.

2. Be There for the Team

Playing as a team is very important in this mode. You should always support your team and the members with cover fire, scorestreaks, throwables or in any other way. This will prevent your teammates from getting killed and survive for longer. This will also increase the man power in your team for the moment in the match.

Your teammates will also reciprocate and try to save you from tight situations in the match. Players need to keep in mind that it is at the end of the day a team game, and playing as a team always paves the path to winning.

3. Utilize Your Scorestreaks and Throwables

Scorestreaks can be used in multiple other ways than just protecting your teammates. Scorestreaks like the Hunter Killer Drone or the Chopper will help you trace enemy players and kill them. One of the key aspects of this mode is that it forces players to come to one place while defending the Hardpoint. Launching a scorestreak on the point, while it is being defended by the enemy, can up your chances of taking the whole opposite squad out together.

If you are a beginner and do not have a lot of lethal scorestreaks, you can always use lethal throwables like the frag grenade, stick grenade or the Molotov cocktail. However, in order to use throwables on the enemy, you need to be close to them.

Therefore, it is important to make sure that you do not tracked or traced by the enemy. Attacking the enemy with throwables will not only kill and damage them, but will also give you and your team a chance to take control on the Hardpoint, which is the objective of the match.

4. Use Guns with Bigger Magazine

A bigger magazine directly translates to more number of bullets. It is very important to use guns with bigger magazines in this mode because the possibility of encountering multiple enemies at once is higher. When you are attacking a Hardpoint in order to take it over, there is a very high possibility that there will be multiple enemies defending it. Guns with 30 bullets in a magazine are not enough.

Guns like the PDW 57 come with a bigger magazine and are easier to control. This will help you take down more enemies. Even if you don’t manage to kill all the enemies, you can always assist your teammates in finishing their kills. Damaging the enemy is very important, kills do not play a significant role in this mode.

Spawn points are extremely important in the Hardpoint mode. Players usually spawn around the current Hardpoint. Be on the lookout while defending the point. You might not be able to see the enemies from the point, but if you move around a little, you can spot them and take them out. This will help you defend the point for a longer period of time and get more kills for your team. If you do not want to lose the point, then place one player there and go for a lookout on your own. This will keep the point safe, and you will be able to know about the position of the enemy.

6. Decide Positions on the Map

As mentioned above, the map is very important in the Hardpoint mode. Deciding your positions on the map can always benefit you and your team and reduces the chance of being surprised with the attack. Two players can defend the Hardpoint and the rest can be scattered around the map to tackle enemies.

This will give you a round plan and the whole team would not die together. Giving the right calls in an attacked situation can also help your teammates be aware of the enemy. Some players can take a look around the corners of the map and some can check the high grounds covering every area on the map.

Speed running is a way of playing where players just aimlessly run towards the enemy in an attempt to kill them. Hardpoint is a strategy based game mode and speed running can put the player as well as the team to die. Some players like running around the map firing bullets at the enemy, but one should not lose vision of the bigger objective, that is to capture or defend the Hardpoint.

Going in with a strategy is always a better idea, and it can be very advantageous for your team. Even if you are style of play is rushing, rushing with a strategy is better than rushing aimlessly. You always rush towards the enemy, not around the entire map looking for them.

8. Don’t Be Afraid of Dying

Hardpoint is one mode where you will die a lot. This is fact and the sooner you accept it, the better it is. If you are someone who is worried about their stats a lot, then this mode is not for you.

You can engage with other game modes, but if you actually want to work on your close combat skills, Hardpoint is the best mode for that. This will make you aware of the map and the multiple boosts that you can apply in a certain map. There is only one condition, you can not be afraid of dying repeatedly.

To ensure a good performance in Hard point, players should keep these things in mind. All of this along with regular practise can help you have a good skill set and understanding of the game. For more such detailed Call of Duty mobile guide, follow Techburner.