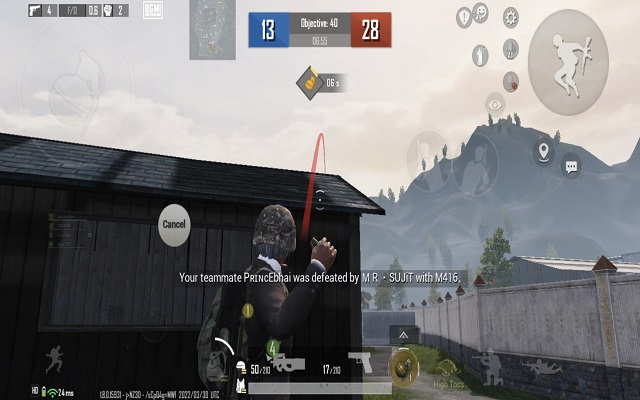 
Powered by iSpeech
Battlegrounds Mobile India is a popular game with multiple weapons, vehicles, maps, and other things. The game has a lot to offer, and there can be times when players do not utilize every option or mode that is offered by the game. One mode that is not much utilized by the players in the Arena mode. This arena guide will let you understand everything about TDM in BGMI. BGMI is a very famous multiplayer battle royale game, but there are a lot of other steps and modes that players need to experience before jumping into the battle royale mode. Arena mode plays a vital role in understanding the mechanics of the game, along with the graphics and the maps. One of the most important and played modes is Team Deathmatch, popularly known as TDM.

What is Team Deathmatch?

Team Deathmatch is a mode where 8 players are divided into two teams of 4 players each. This mode takes place on a closed map and goes against the common concept of battle royale where the maps are open. The map on the Team Deathmatch is closed, and it is easier for players to spot each other. Both teams start on either side of the map and then engage in combat whenever they come in contact with any player from the opposite side.

The winner of a match is decided on the basis of the number of designated kills. The first team to reach 40 kills collectively wins the match. Every player spawns immediately after death and does not need to wait for the entire team to get wiped out. The score count is kept on the basis of kills. Every kill counts as one point, and therefore the matches do not go on for very long.

There are multiple guns in BGMI, and this BGMI guide will have all the information about the guns that are good for combat in this mode.

It is one of the best guns in the game, and there are several reasons for it. Firstly, it is very easy to handle and control. Players do need to practice with the gun, but it is not very difficult to master it. However, with the right attachments, the gun can be made more powerful. This gun is very popular among a number of players.

The gun fires 5.56-mm bullets that are not very difficult to find. Apart from the guns that are drop-exclusive, this gun is preferred by the majority of players. Since it is an assault rifle, it is effective in TDM in BGMI. Assault rifles have a higher rate of firepower, and this makes it easier for players to pick up kills.

The ideal attachments for this weapon can be a vertical foregrip, compensator, extended quickdraw mag, and tactical stock. Attaching these will make the gun more stable and precise while shooting, even at a mid-range target.

One of the most brutal guns in close range, this assault rifle needs to be in every weapon layout. This assault rifle takes inspiration from the OG AK47. The gun fires 7.62-mm bullets. These bullets are common for a number of guns, and therefore are largely available. The gun is so effective that 2 headshots can take down the enemy. The gun is a high damage, and if the bullets are connected, it can be very effective.

The rate of fire of the gun is high and can be lethal at close range. Since TDM in BGMI takes place on a closed map, this gun can be a good friend. One thing that can be a challenge with this gun is the control. The recoil of the gun is a little higher than other guns in the game. This can get slightly challenging for the players, but it can be overcome by practice.

The ideal set of attachments for this gun is a compressor, extended quickdraw mag, and a red dot sight. This will reduce the recoil, but players still do need practice. Players can also use Beryl M762 in place of AKM, but that is a little more powerful and harder to control.

This is not an assault rifle, but a submachine gun. It made the list because it is considered to be the best gun for close-range combats in the game. Uzi has the highest rate of fire in the game and can shoot the most number of bullets in the shortest amount of time. No matter what gun your opponent is if you are close have the Uzi, you have a higher chance of getting the kill.

There are certain challenges with the gun that players need to know about. One of the first challenges is the magazine size. The magazine size of the Uzi is small and does not hold a lot of bullets. Therefore, it becomes very important for players to connect every bullet to the enemy. Secondly, the gun is only effective at close-range. The bullet drop is high in mid-range, long-range fights just can not be taken with this gun.

The ideal attachments for this gun are a compressor, extended quickdraw magazine, and a stock. These will increase the control and magazine size of the gun, but the range does not increase. It is still a close-range weapon.

Best Tips for TDM in BGMI

TDM can be challenging in BGMI. It is much more fast-paced than the classic model, but these tips will help you perform better in the mode.

Keep Your Movement in Check

Moving around is the major part of BGMI, and this does not change in TDM. Fast movements will ensure your smooth movement along with the map. If your movements are fast, it will be difficult for the enemy players to take you down. Movement does not just include moving forward and backward, it also means using the combination of the crouch, jump, and prone. Combining these movements will make it difficult for the enemy to take you down.

Even though assault rifles are recommended for TDM in BGMI, it depends on the players. If you want to improve your sniping skills or recoil control, it is best to go into the TDM mode. You can change the weapon layout after you die, but if you are struggling with a certain gun or weapon type, you can use that in TDM.

Cover is the Key

Staying on the cover is very important. As mentioned above, TDM in BGMI takes place on a closed map. Players and enemies can come from any direction, and it is best to not run around with a gun in hand. Moving from cover to cover is the right way to go, as it will keep you from getting blind-sighted. Staying in cover will also keep you from getting attacked from height or distance. There are multiple corners on the map, and players camp in TDM too. Therefore, it is best to stay alert, and in cover.

TDM in BGMI can be challenging, but it is a good mode for enhancing your skills and learning about the game a little more. There are multiple other modes in BGMI. To stay up to date with all the upcoming game guides, keep an eye on Techburner.

Professional Esports as a Career: How to Get Started