How to Recover Deleted Photos on Android Phone without Computer? 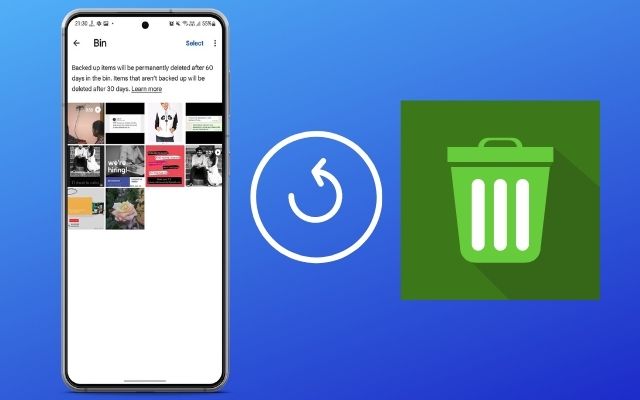 How to Recover Deleted Photos Without Computer?

You'll need a backup in your Google account if you want to restore lost images without using a computer.

Step 2: Tap the Library option in the footer menu. Then choose Bin.

Step 3: Now go through your deleted images and tick the ones you wish to restore to your Android phone.

Step 4: Tap Restore in the upper right corner to get the images back.

You can also check your phone’s native cloud such as Samsung devices has Samsung Cloud.

Restore Images Without a Backup

Sometimes an issue occurs before you have a chance to perform backups. If you have made no backups, you'll have to rely on third-party help.

Deleted images, in general, are not erased from the phone. After being deleted, they are just flagged and hidden on your system. Therefore, many apps can retrieve deleted images. But, after downloading apps or receiving files, the trashed photos will be overwritten. It makes data recovery impossible. So, do it as soon as possible!

Tenoshare UltData is a fantastic tool for recovering images from your Android device without a computer. You can do the following:

The ways to restore lost images from Android without rooting or using a computer are:

Step 1: After installing the app, launch it and choose the kind of data you want to retrieve. Tap on the Images option.

Step 2: Now it will begin scanning all the deleted images. It may take some time depending on the quantity of data to recover.

Step 3: Once you have a list of recoverable images, select the ones you want to get back. Then just tap on the Restore option.

There are other apps to recover permanently deleted photos without computer. Check out the suitable one for your device.

So, that's all on how to recover deleted photos on Android phone without computer. To summarise, always backup your photos to a Google account so that you can recover images easily using Google Photos. If you don't have any backups, use the recovery apps.

How to Delete Amazon Prime Watch History in All Devices