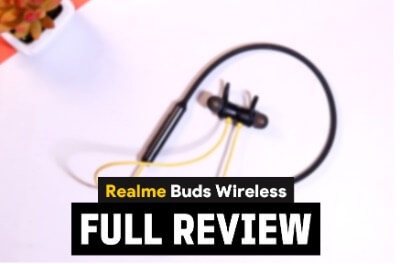 Realme launched its first Bluetooth headset alongside Realme XT & Realme Power Bank last month. The brand has a reputation for launching products at surprisingly affordable prices. Needless to say, everyone, including us, instantaneously developed tough-to-meet expectations with the Realme wireless earphones. We got a piece ourselves, unboxed, and began rigorous verification of the potential of Realme Buds Wireless. After using it for a while, we can safely declare that at its price, Realme Buds Wireless is the best wireless headset out there. Importantly, Realme Buds Wireless price in India may vary on special occasions, but more on that later. 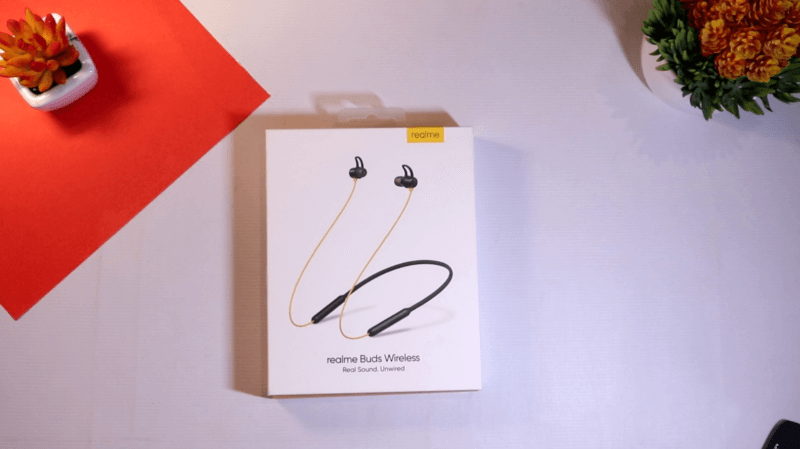 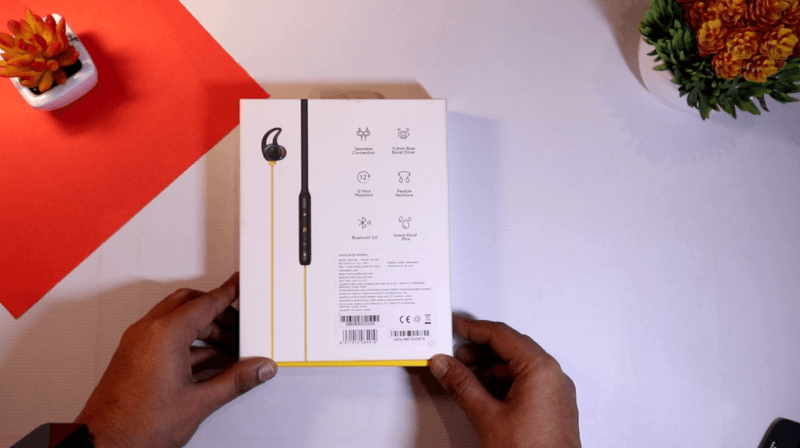 In the box of Realme Buds Wireless, we found the headset, a user manual, a USB-to-micro-USB cable, and two extra pairs of silicone wingtips (one smaller, and the other larger than the pre-installed pair of buds.) Directions for using & charging the headset can be found on the user manual. 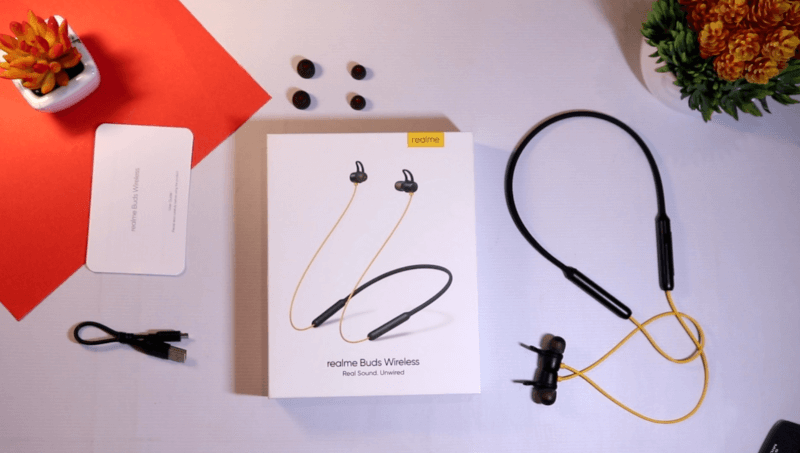 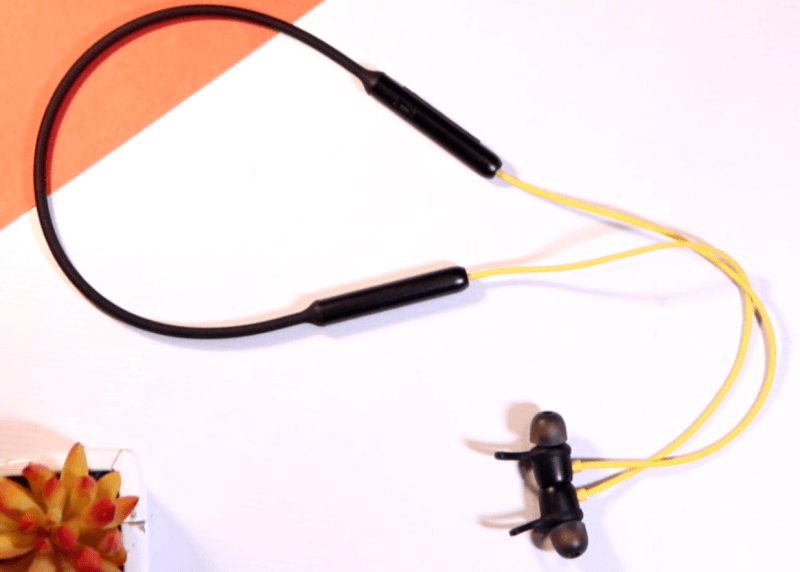 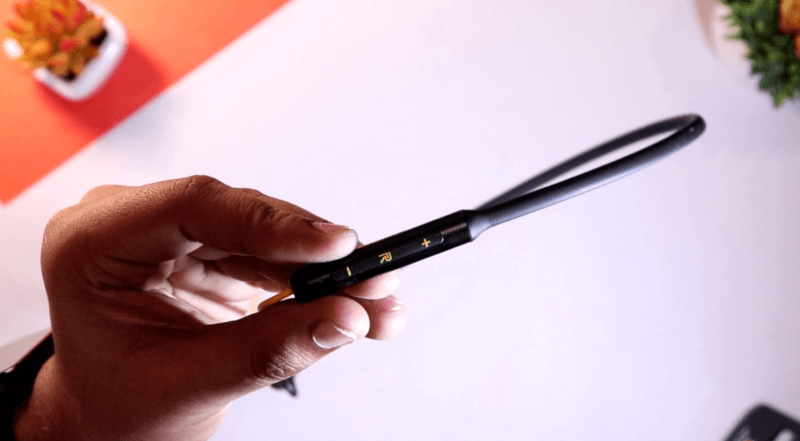 The wire that connects the neckband with the earbuds, to begin with, is of exceptional calibre and can last quite long without any breakages. Besides, the bright yellow colour contributes to the overall attractiveness of Buds Wireless.

The neckband that sits on the back of the listener’s neck is a slim, aptly rigid arc and is made of silica gel. However, it is flexible enough to feel comfy on the neck as well as to not break when bent. The rubberised material is surprisingly lightweight, despite looking a little bulky. This band ends in two metallic parts made from a nickel-titanium alloy which rest on the collarbones on both sides. The right one of these has the control buttons with icons of yellow accent on it. The Realme-branded button in the middle can summon the Google Assistant, accept, reject, or end a call, play or pause audio, and play the next or the previous song. Procedure to give these command can be found on the user manual that comes in the box. To adjust volume, use the first and the last buttons. 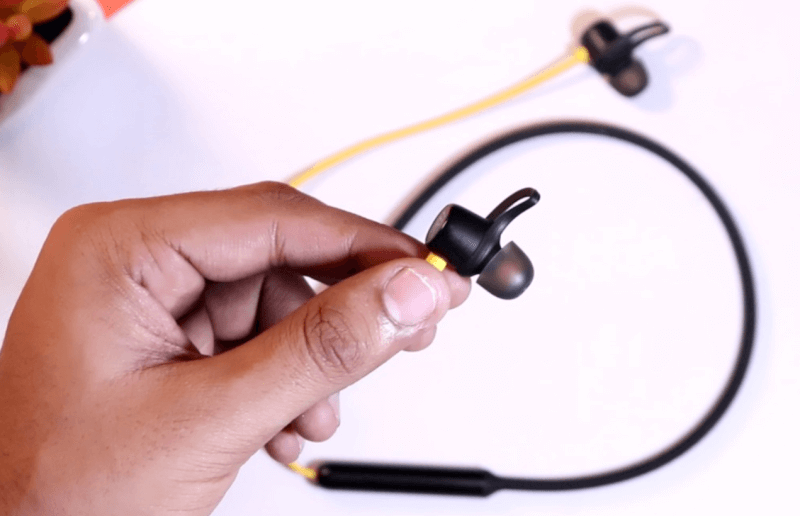 Lastly, the silicone tips of the earbuds sit firmly inside, so that active movement doesn’t make them fall off or shift around. All the wingtips that come inside the box are admittedly soft and comfortable, which makes it easier to go non-stop for several hours at a time.

Unlike most other earphones, Buds Wireless doesn’t generally awkwardly dangle around, proving to be a fantastic choice for gym-goers. By and large, Realme Buds Wireless gives commendable service for the low price tag it has. Indeed, lack of premium feel that one might expect is evident — but that’s just good as it gets. 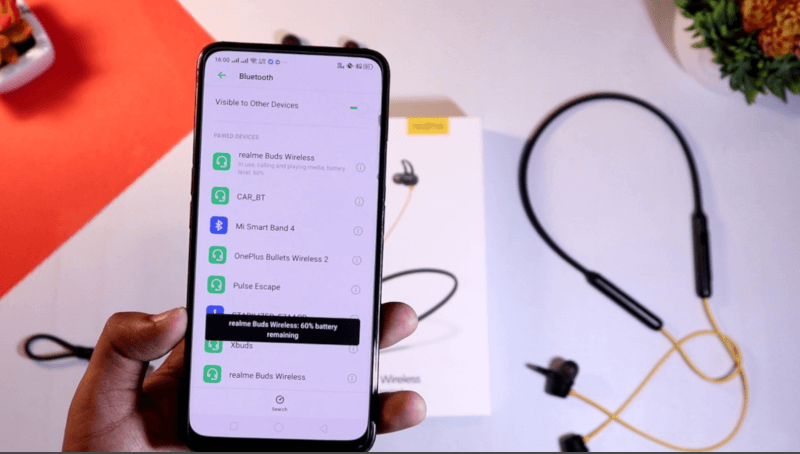 Realme Buds Wireless can connect one device at a time via Bluetooth v5.0. In some other Bluetooth headsets of the similar price range, such as Boult Audio ProBass, one can connect up to two devices at once. Notably, Realme’s wireless headset covers a good range of connectivity. It remains connected to the device even from one to two rooms beyond, for instance.

However, Realme Buds Wireless does have a special feature or USP. While some other brands do provide magnetic earbuds attachment for namesake, the MFP (Magnetic Fast Pairing) tech in Buds Wireless presents another level of convenience. We don’t need to press-hold a button for 5 seconds or so to turn off when not in use or repeat the process to turn back on Realme Buds Wireless. Attach the earbuds, and the headset will disconnect & switch off rather instantaneously. You might want to be mindful when cramming the earphones in a bag or a purse, though, as they might occasionally detach and connect with your device. 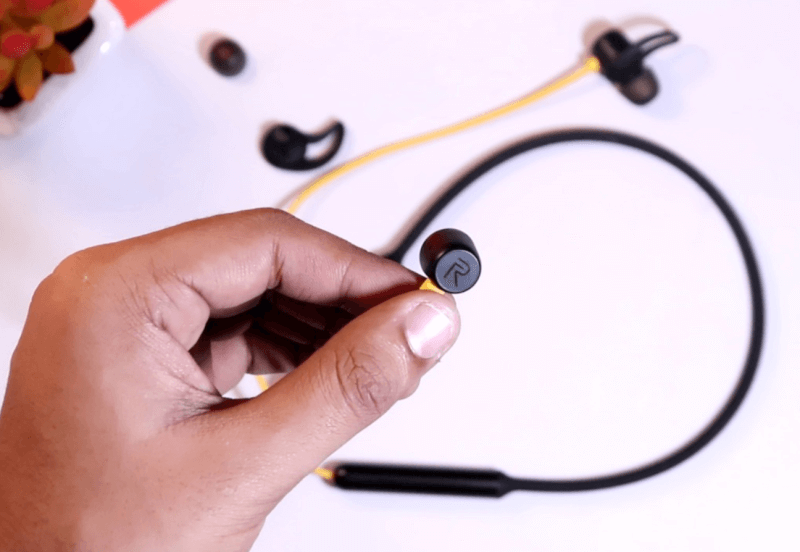 Realme promises 12 hours of continuous playback, which is a lot more than other wireless headsets generally offer. We tested, recorded the observations, and repeated, concluding that Buds Wireless does give about 11-12hrs. More specifically, backup of nearly 12 hours is achievable on 75-80% volume.

In addition, Realme provides fast charging-supportability here. A 10 minute-charge, according to the company, can last approximately 100 minutes on constant playback. The LED light stays red even on a full charge, so deciding when to plug out may prove confounding. Anyhow, it takes very little time to charge Buds Wireless fully. When connected to a device, it turns blue. 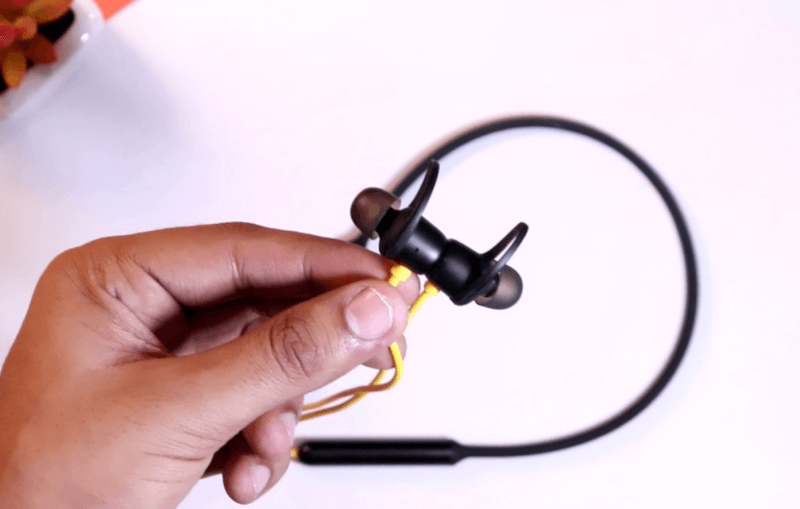 Realme has attempted to target the greater part of the audience — not the audio-geeks, but the common, casual listeners. In other words, Realme Buds Wireless focusses more on bass than other aspects because the general audience prefers it. The 11.2mm Bass Boot driver buttresses Realme’s appeal.

We tested a wide variety of songs from multiple artists on the headset, from Arijeet Singh to Alan Walker and even heavy acoustics. Vocals aren’t always very crisp but otherwise, we get a rich output with a clear distinction between instrumentals and vocals.

Realme Buds Wireless is said to have been tuned by the renowned music producer Alan Walker. When listening to EDMs, his contribution is quite audible. Noise ambient and bass kick are impressive, but noise cancellation is only moderately good.

The most perceptible lapse is distortion in output at high volumes. In addition, calls tend to get a tad bit problematic in noisy surroundings where the person on the other end might find it hard to hear your voice.

Buds Wireless sports supportability for AAC codec, but not aptX. Consequently, a slight lag is possible on YouTube, PUBG, etc. Apart from that, a seamless experience can’t be denied.

Verdict – Should You Get Buds Wireless?

With the bass quality, comfort, battery life, and other features that Realme Buds Wireless offers, it is hands down the best Bluetooth headset in its price range. More so with sale discounts, it is bound to disrupt the wireless earphones market. Realme has almost always created best-in-range smartphones and implementing the same philosophy in this headset, it has left barely any points to count for cons. Voice call and high-volume audio are the only two areas in which Realme Buds Wireless gives any tough time.

Some more beneficial features that the headset could have had are aptX, connectivity to multiple devices simultaneously, and wire-length adjuster. No matter, Realme Buds Wireless remains the best at its price. Designed to appeal to the aesthetic needs as well as convenience of Millenials, Buds Wireless is a decent choice in virtually every regard.

Google could launch its Pixel Watch along with Pixel 4