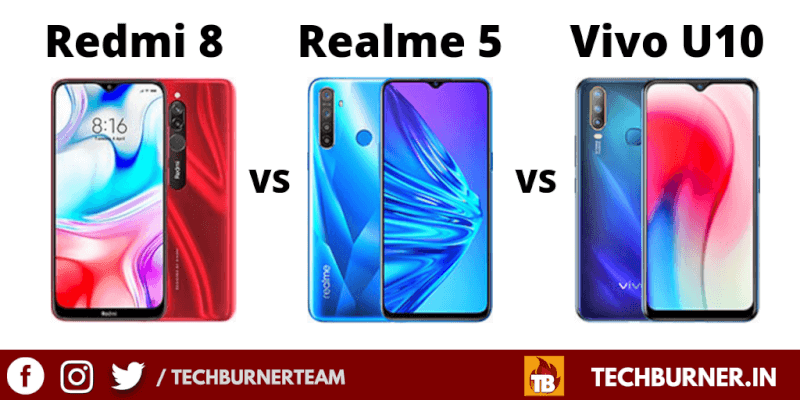 https://www.ispeech.org/text.to.speech
Xioami launched the Redmi 8 a few days ago and it will come to India on 12th October 2019. However, the competition in the under  Rs. 10,000/- category is already very strong and Redmi surely lacked a few corners in this recent launch. So we took 3 best budget offerings as of now and compared them side by side. So in this article, we will take a look at Redmi 8 vs Realme 5 vs Vivo U10, currently ruling the Rs. 10,000/- category. Although Realme 5 is priced a bit higher than the benchmark, most of the time it is available around 10k in various platforms.

Among these 3 offerings, Redmi 8 is the lightest of them weighing at 188gm, whereas Realme 5 is highest at 198gm and Vivo U10 at 190.5gm. Nonetheless, they all come with similar battery capacity. 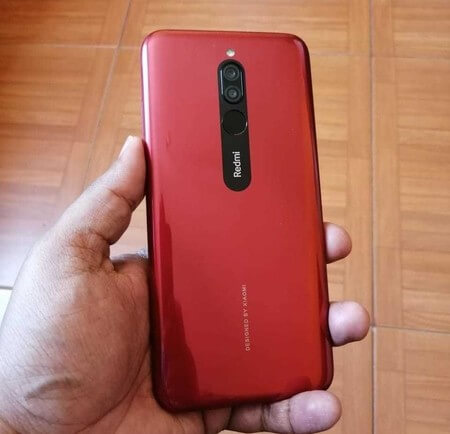 In the Redmi 8 vs Realme 5 vs Vivo U10 comparison, all of them come with 720p IPS LCDs with Redmi being the least at 6.22inches, Realme being the highest at 6.5inches and Vivo U10 at 6.35inches. All of them come with a v-shaped notch. However, Redmi houses the Redmi logo at the bottom chin which makes it look the least appealing. Realme has the highest screen-to-body ratio here with minimal bezels. However, Redmi 8 comes with Corning Gorilla Glass5 as compared to Realme 5's Gorilla Glass3+ with Vivo having no disclosure about it. 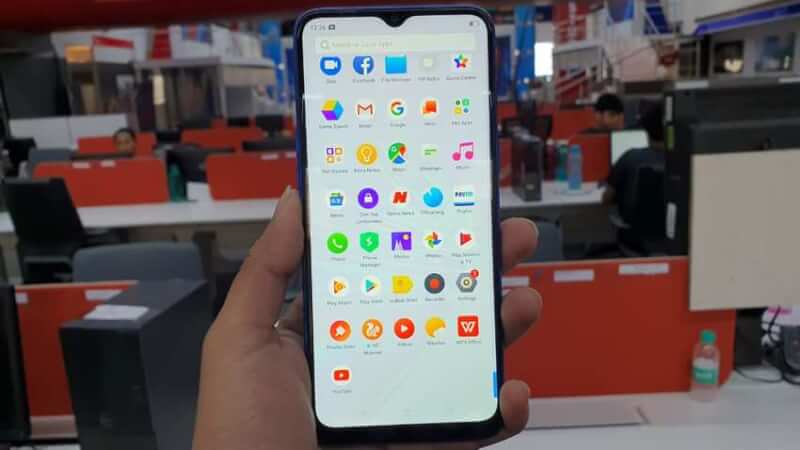 This is where Redmi lags far behind the competition. If you can remember, Redmi 7 came with Snapdragon 632. But, this time, Redmi 8 comes with Snapdragon 439 and we have no idea why! On the other hand, Realme 5 and Vivo U10 both come with Snapdragon 665 which is a quite powerful budget chipset. The higher cores of SD665 and SD439 are almost similar to 2.0Ghz and 1.95GHz. But, the Redmi lags in the regular cores which are used most of the time. SD665 regular cores are clocked at 1.8GHz as compared to 1.45Ghz in Sd439. Also, SD665 is based on 11nm and SD439 is based on 12nm.

Also, the GPU Adreno 610 of SD665 beats Adreno 505 of SD439 by miles! In our opinion, in the Redmi 8 vs Realme 5 vs Vivo U10 comparison, Redmi falls a lot behind in the processor department! 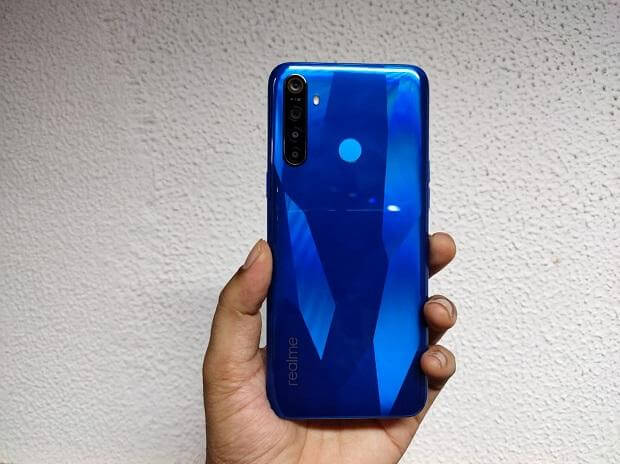 However, all of them are based on their custom skins on top of Android 9.0 Pie and Android 10 is expected for all of them.

This is also a department where Redmi loses by miles in the Redmi 8 vs Realme 5 vs Vivo U10 comparison. Redmi has 2 cameras, Vivo has 3, Realme has 4. However, we ain't saying having more cameras is better always, but having options is always good! Redmi 8 only has a primary shooter and depth. Vivo has a primary+depth+wide angle which is very important in clicking some amazing shots. Surprisingly, even on this budget, Realme has 4 cameras with primary+depth+wide-angle+macro. Also to mention, Realme 5 only has [email protected] video support.

In the selfie department, Vivo and Redmi both have 8MP shooters, Realme 5, however, has a 13MP one. 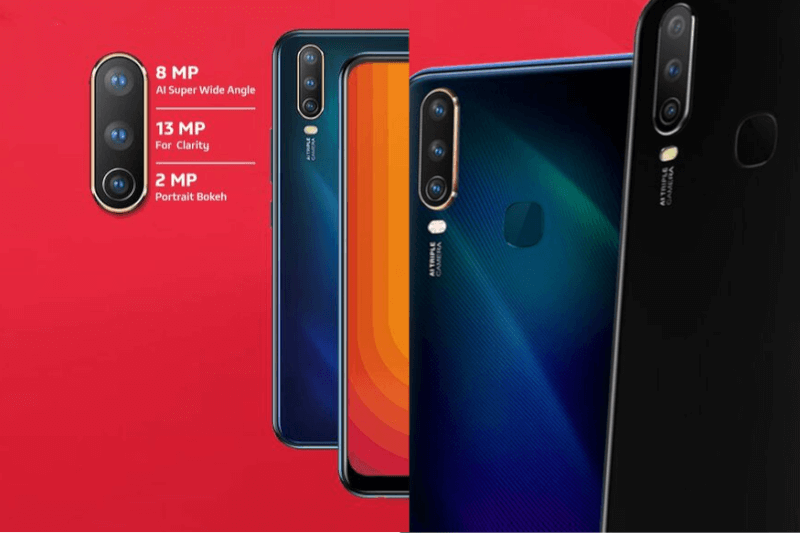 All of them have all the basic required sensors including rear-mounted physical scanners for all of them. However, only Realme 5 has a gyroscope which is, in frank opinion, very necessary and certainly a deal-breaker for the other 2 in the Redmi 8 vs Realme 5 vs Vivo U10 comparison. Not only in gaming, but gyro is also necessary for Google Maps and many other maps to determine directions.

Redmi 8 vs Realme 5 vs Vivo U10 all comes with 5000mAh battery but the difference lies in charging speed. Realme 5 supports 18Watt charger with the other 2 maxing out at 10watts. 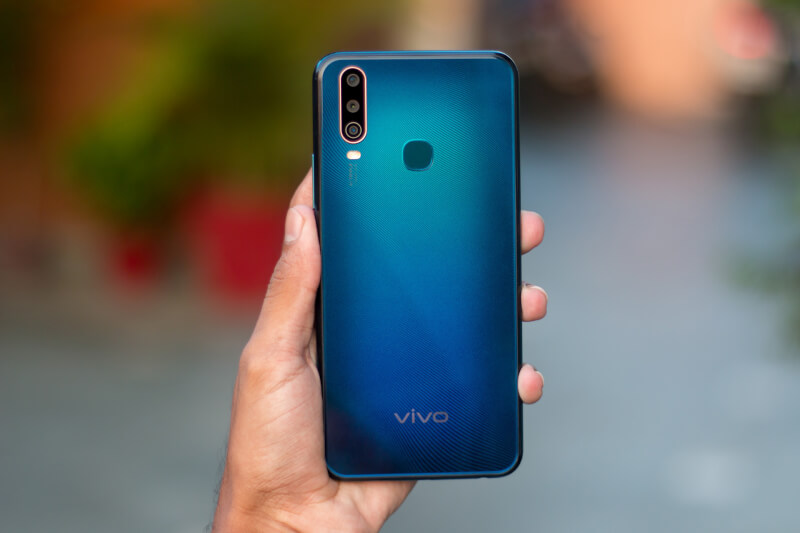 Realme and Vivo have Bluetooth 5.0 support, whereas Redmi 8 has 4.2. However, another deal-breaking side is MicroUSB of Realme and Vivo with Redmi 8 rising with Type-C port. All of the 3, fortunately, has a 3.5mm headphone jack 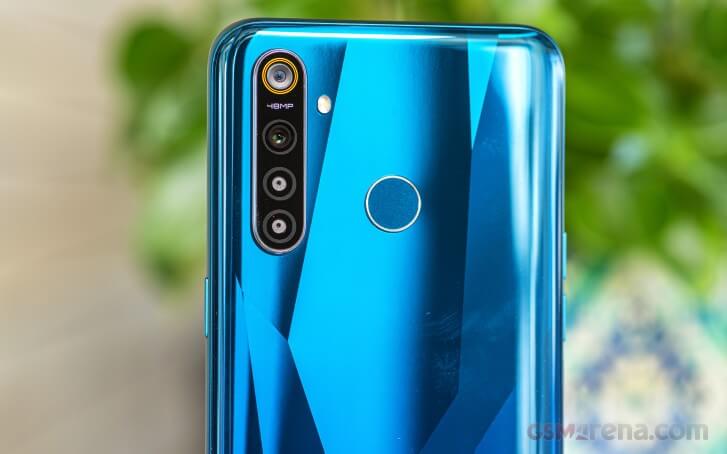 For a detailed specs comparison, refer to the below chart.

Join our Telegram Channel for more updates!
Related Topics:Realme 5redmi 8Redmi 8 vs Realme 5 vs Vivo U10vivo u10
Up Next