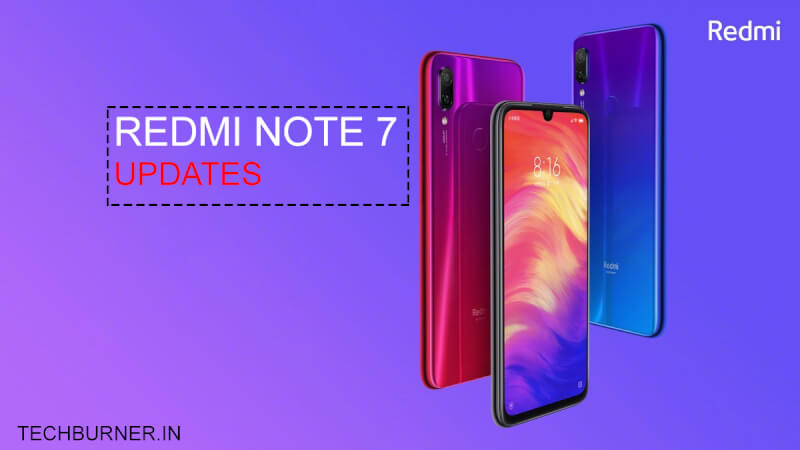 Redmi Note 7 is the first phone launched under Redmi as a sub-brand by Xiaomi. Within just a month Xiaomi has shipped over 1 million units in China itself. The smartphone will launch in India on 28 February 2019. In case you are planning to buy one, this article will help you ensure that you have the latest Redmi Note 7 Updates. For Redmi Note 7 MIUI 11 based on Android Pie is possible, as it is among the smartphones who will possibly get the update. MIUI based on Android Q will also launch in a year and this article will tell you when it’s available. Welcome to ‘Update Series for Redmi’. We will update this particular page with all the upcoming software updates of Redmi Note 7.

Note 7 gained so much popularity for having a 48 MP Samsung ISOCELL GM1 sensor at an incredibly low price. Just like its predecessors, it was launched at 999 Yuan in China. In India, that amount rounds off to 10000 INR. The phone has Android 9 out of the box with the latest MIUI 10 based on Android Pie on top. Powered by a Snapdragon 660 SoC and a 4000 mah battery, Note 7 has a two-tone gradient glass back. It’s already generating a lot of buzz alongside the Realme 3.

Since we know from Xiaomi’s past that they distribute updates evenly to all of its smartphones without discrimination. Some phones get it earlier, some may get it later but all of them do get it eventually. So we are going to assume that Redmi Note 7 will also get MIUI 11 and MIUI 12 too eventually.

As we know, Xiaomi follows Apple’s footsteps for many things like designing the back of their phones (No offense! Many brands do that :p), UI design and regarding software updates too. Redmi Note 5 Pro was launched with Android Nougat 7.1.2 out of the box. Recently, Redmi Note 5 Pro got updated with Android Pie 9.0 which is its second major OS update. This makes us believe that Android Q will definitely come to Redmi Note 7. So stay tuned to this article if you own an RN7.