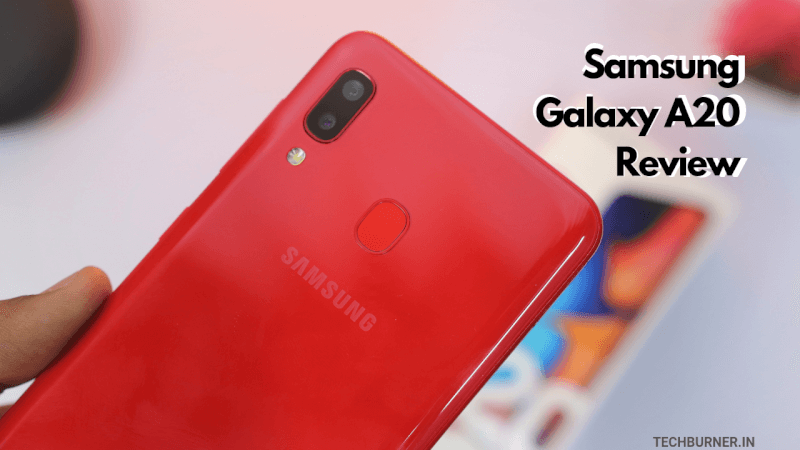 Samsung is known for its flagship smartphones. S series and Note series smartphones are awesome. However, the budget or mid-range Samsung smartphones weren’t that good. But after the tough competition in the budget category by Realme and Redmi, it seems like Samsung is definitely trying its best to make the competition even tougher. A series of Samsung smartphones are nice. If you are planning to buy a budget smartphone, our Samsung Galaxy A20 Review will help you. Samsung Galaxy A20 specifications are impressive. 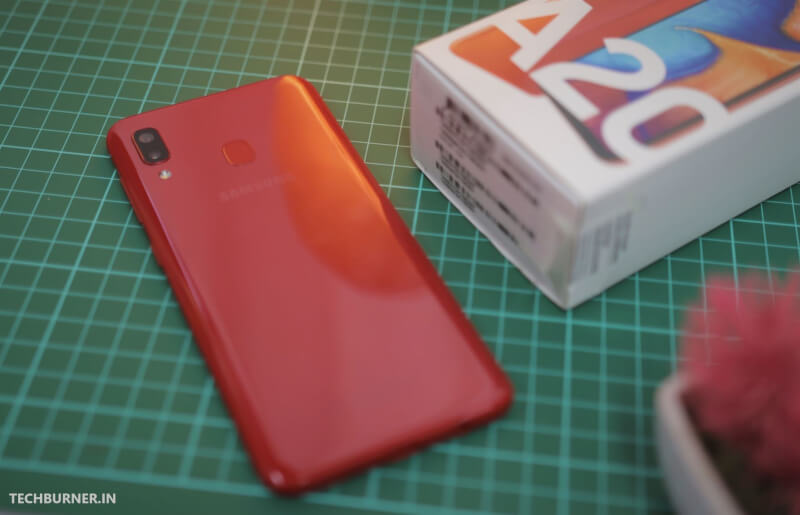 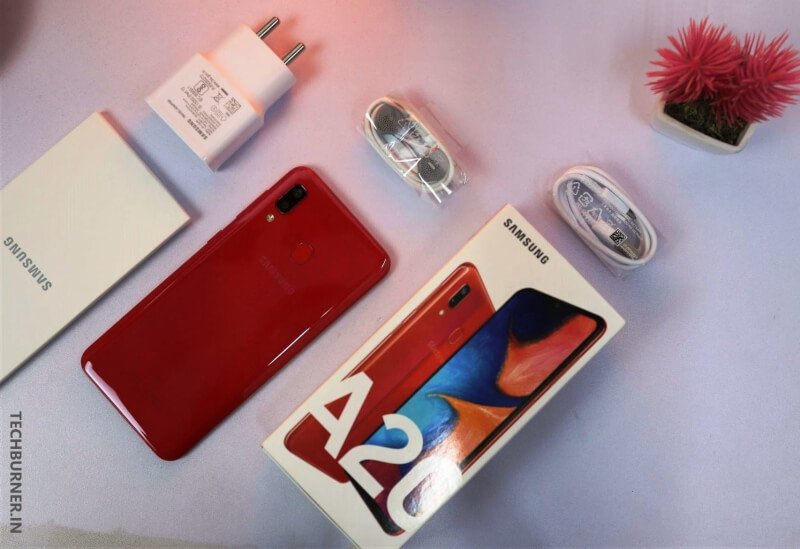 A series of smartphones by Samsung looks good and eye catchy, the same case with the Samsung Galaxy A20. It looks gorgeous on the first look. It comes with three colour options, Red, Blue, and Black. We had a red colour unit, which looks glossy and shiny. In hand, it feels a bit-premium and a plastic build. It is made of polycarbonate. The back is fingerprint magnet but it feels solid in hands. Overall the design and build of the A20 are above average. We would suggest using a TPU case cover along with the phone in a way to protect it from scratches. It will get scratches pretty easily because of the plastic back panel.

The bezels are minimal and the chin at the bottom is thin. The Fingerprint sensor is present on the back which is slightly on the upper side, it takes a few days to get used to it. Volume keys and power button present on the right side. USB Type C present which is always a welcome step and our favourite 3.5mm Audio Jack is also present. On the design point of view, it is a nice build with premium design. 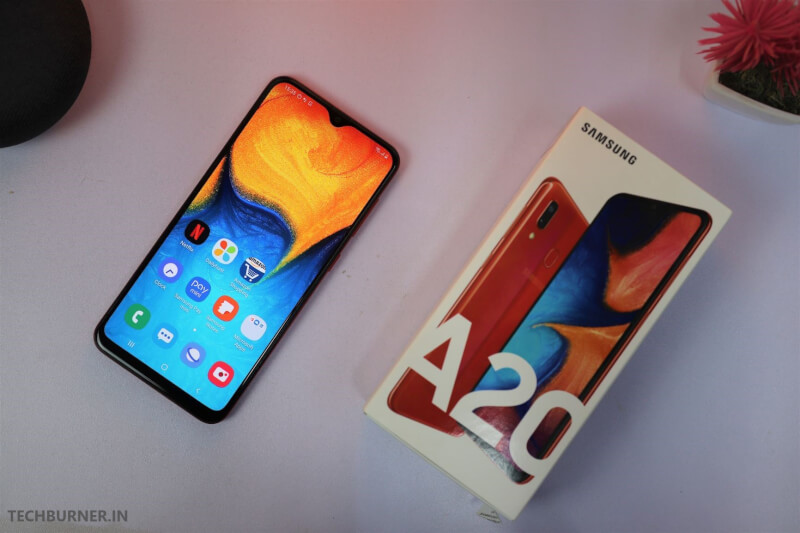 Talking about the Display of the Samsung Galaxy A20, it is beautiful. 6.4” Super AMOLED panel is vibrant and sharp. In this price point, Samsung A20 is the only device to feature a Super AMOLED Panel and most beautiful DIsplay. That’s why we at the TechBurner thinks that A20 could be a perfect match for all the entertainment lovers.

However, we don’t know why Samsung has used the HD+ panel instead of FHD+, which slightly taking back some positive points here. The water drop notch is present, Samsung used to call it Infinity-V display. Outdoor visibility is good too. Since it is an AMOLED display, so the black looks black and overall colours and contrast are on point. The only complaint here is about resolution. We can not see any major issue while media consumption but it losses out details while reading some text our browsing on the internet.

The Samsung A20 Camera features a 13MP primary sensor coupled with 5MP Ultrawide lens to capture some nice photos. Photos captured in good lighting condition are well exposed and the colours are well balanced and natural. It does not oversaturate the image which is nice. Plus, the dynamic range seems nice too. however, the 5MP ultrawide camera is not much impressive. The image looks nice but it misses out the details. You can get some more details in our Samsung Galaxy A20 Camera Review.

Talking about the 8 MP selfie camera, It captures decent selfies. The portrait mode on the front and back both are not so accurate, and it needs major upgrades. Edge detection is not perfect but workable. We have many phones such as Redmi Note 7 or Asus Zenfone Max Pro M2 which captures better photos than the A20 at the same price bracket. In terms of camera, It is a decent phone and we can’t recommend to any user who is looking for a camera-centric device.

But, the Camera is definitely not the deal breaker here as an entertainment-based device. It does the work pretty fine and captures good quality images. Samsung is also featuring Wide-Angle camera lens to every single budget to flagship device and it’s pretty awesome while taking pictures. However, Samsung Galaxy A20 does not feature a wide angle in Selfie camera but feature only in the rear camera.

From the very beginning, We have seen Samsung does not try to portrait Performance in  Budget Devices. Such as Samsung Galaxy A20 is powered by Exynos 7884 SoC, it’s a Homemade chipset by Samsung. If we look at the AnTuTu score then it scored somewhere around 95000. It is far behind than what we get in this price range. The fingerprint sensor takes 1 second to unlock and face unlock is also slower than what we expect.

However, the latest Samsung OneUI helps to improve the overall performance of the device. App opening feels smooth and it is well optimized for day to day life performance. Heavy games such as PUBG or Asphalt 9 is not snappy. Multitasking is a bit difficult due to the presence of only 3GB RAM. We can see stutter here and there. As a result, it is not a good option if you are a heavy user.

It supports Dual 4G and Dual VoLTE. We faced no issue while calling. The network seems good. Dual-band Wi-Fi is not present. This is one of the most impressive aspects of Samsung Galaxy A20, it’s featuring 4000 mAh massive battery capacity, which is an ideal choice for all smartphone brands in the budget segment. A20 is able to perform great in battery life because of the Super AMOLED panel. You can easily pick Samsung Galaxy A20 for great battery life and fast charging as well. It usually lasts for more than a day most of the time. It will easily give you one day of battery life. One more good thing about A20 is 15W Fast Charger is bundled in the box. USB Type C charging port is present which is always good to have. It takes less than 2 hours to fully charge. No complaints about battery life.

Verdict – Should You Buy It?

Let’s now come to the conclusion. First of all, Samsung Galaxy A20 is a premium looking device with a nice and sturdy build quality. AMOLED panel looks gorgeous and the only down point here is HD+ resolution. A big thumb up for the Battery life and fast charging support. OneUI is fluid and feature pack, no complaints here. However, Samsung has to work hard in terms of Performance. It is far far behind than what we get in other smartphones in this price range. The camera performance is good here, which could be better.

If you are planning to buy a Smartphone for media consumption with the premium look then definitely Galaxy A20 is the way you go. If you are a heavy user, who loves to play games then this is not a phone for you. Realme 3 Pro, Redmi Note 7 and 7 Pro offer great performance in this price range. Of course, it is not an ideal phone to capture good photos.

That’s all in the Samsung Galaxy A20 Review. Stay Tuned with us for more amazing and helpful Smartphone Review.