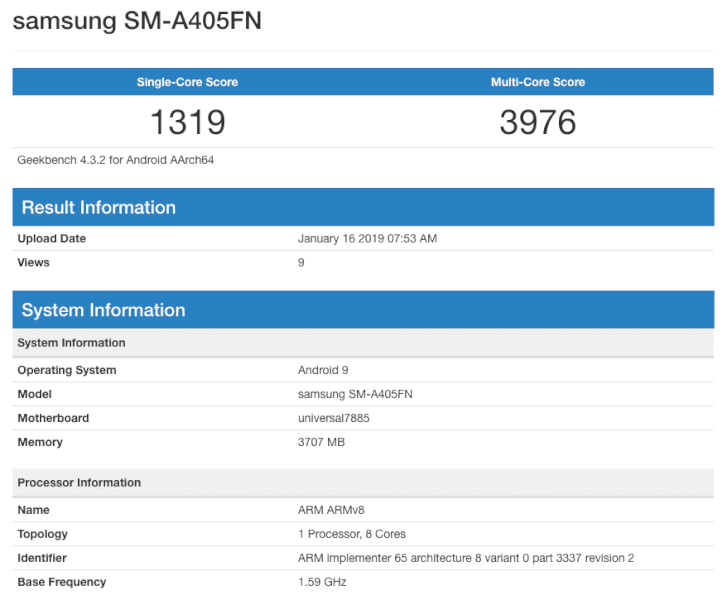 Samsung’s previously rumored Galaxy A40 has made an appearance in a benchmark test, providing the first glance at its specifications. Furthermore, some details about where the phone will be released have also surfaced. Earlier this week we reported that Samsung was planning to release three Galaxy A-series phones with in-display fingerprint sensors. The three phones are the Galaxy A90, Galaxy A70, and the Galaxy A50. Now a fourth model in the series, the Galaxy A40, has shown up on Geekbench along with some specs.

Highlights of Samsung Galaxy A40:

Specifications of Samsung Galaxy A40:

Chances are, this is the Galaxy A40 which is supposed to be one of the new A-series devices packing an AMOLED display. As GalaxyClub says, the listing reveals hardware similar to last year’s Galaxy A8: the Exynos 7885 soc is accompanied by 4GB RAM. Just like the upcoming Galaxy A50, the A40 runs Android 9 Pie out of the box. The Samsung Galaxy A40 has gone through Geekbench. It is powered by an Exynos 7885 chipset, which was recently featured on the Galaxy M20.

The Galaxy A40 scored 1316 points in the single-core test and 3964 points in the multi-core test. Other than this Geekbench result, we do not know anything about the phone. However, we expect more details should surface in the coming weeks. We can expect this device to feature a display notch and a traditional fingerprint scanner at the back. Previous reports had suggested that the Galaxy A50, Galaxy A70, and Galaxy A90 will feature an in-display fingerprint scanner. Some Galaxy A models in the series are also said to get a 3D TOF camera.

Read about Galaxy A50 also here at https://techburner.in/galaxy-a50-launch