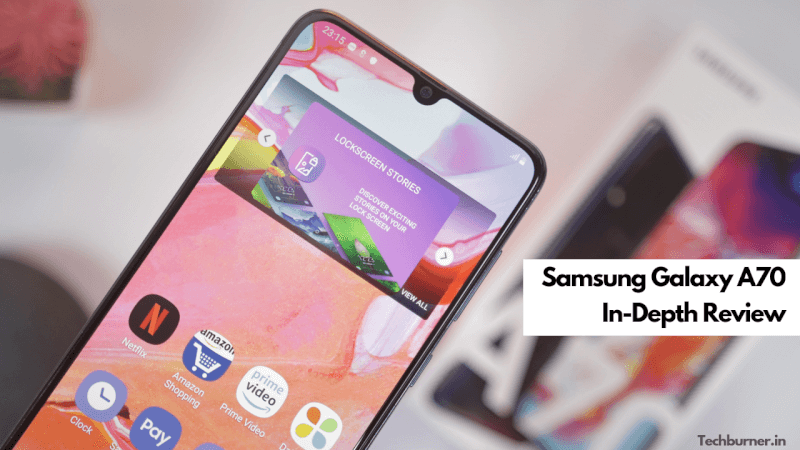 Let’s first look at the specifications of the Samsung Galaxy A70.

Unlike the older smartphones by Samsung, the new A-series and M-series Smartphones by Samsung look eye catchy in the first look. Similar to other A-Series phones like A20 and A50, the back panel of the A70 is made up of Plastic. The back panel looks like the glass and reflects the light which looks nice. In-hand feel is good but due to it is plastic so it does not feel that much premium. The weight is 183 gram, so it feels sturdy in hand. 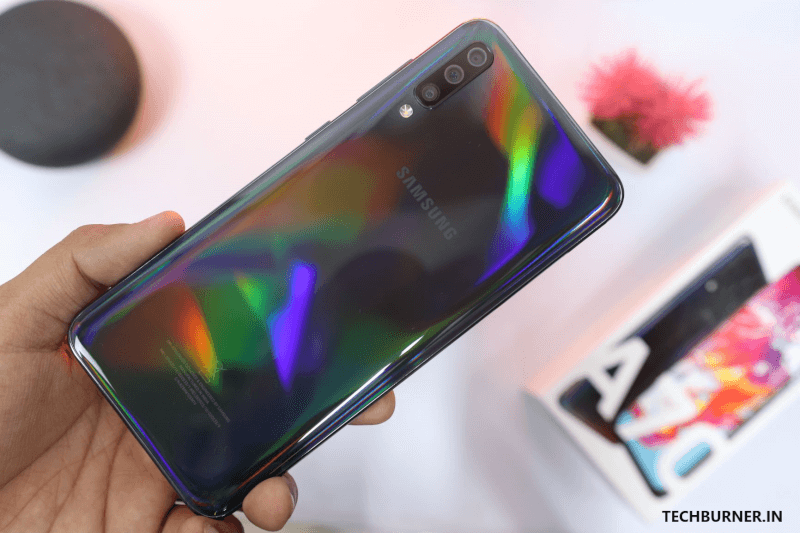 When light reflects on the back panel it gives the Rainbow effect which definitely looks beautiful. 4 colours options are available Black, Blue, Coral, and White, we have the Black A70. The back panel is plastic so it will get scratch and also it is a fingerprint magnet, so we suggest you cover your phone with the transparent protective case given in the box.

The back is almost clean with a triple camera setup on the top left corner and Samsung branding in the middle. Where is the fingerprint sensor? It is placed underneath the display. We will talk more about that in a minute. It is a 6.7″ smartphone but the polycarbonate back with the perfect curves makes it easier to hold the phone in hand. 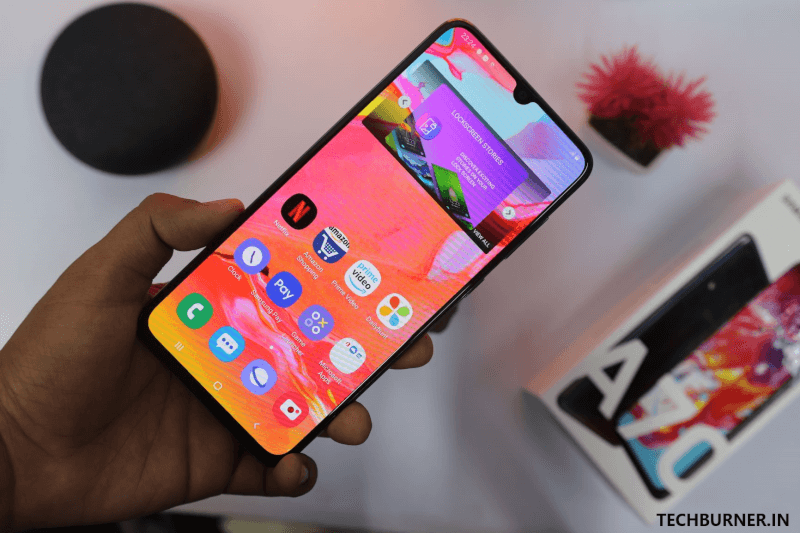 The Display is always a strong point of Samsung Smartphones. A massive 6.7″ Super AMOLED panel with FHD+ resolution unlike HD+ on the A20 looks really gorgeous. It is a 20:9 panel with a tiny water drop notch, Samsung used to call it Infinity-U Display.

Deep Black looks Deep Black in this Super AMOLED display. Colors and sharpness of the display are on point. Media consumption on this beautiful display is a great experience. Samsung tried its best to make it bezel-less. The chin is very minimal and the bezels around the display are also very thin. It is protected by the Corning Gorilla Glass 3 to prevent from the scratches. Also, it comes with the Widevine L1 supports out of the box so you can stream HD content on the Amazon Prime and Netflix. It can record up to 4K @30 fps videos and 240fps at 1080p is also present for the slow-motion videos. But due to the lack of OIS and even EIS, the videos are not stable.

The Impressive Camera but…

The 32MP camera sensor on the back captures quite good images in daylight condition. Most of the photos captures are in 12MP of resolution. You can manually turn on the 32MP mode. In our testing, we find out that there are more details and photos come out sharper in the 32MP but the dynamic range does not seem good in the 32MP. Photos capture in 12MP are more pleasing to the eyes.

Stay tuned with us for the detailed Samsung Galaxy A70 Camera Review. Overall the camera seems nice but it is not the best. There are a number of smartphones available in this price bucket with good camera quality.

First thing first, A70 is powered by a Qualcomm processor, not an Exynos processor. Good job Samsung! It is powered by the Qualcomm Snapdragon 675 processor. We have seen this processor in the Redmi Note 7 Pro and it performs too good. The day to day life performance of the A70 is fluid and snappy. Even the heavy task and high graphics games such as PUBG and Asphalt 9, runs smooth. 6GB of RAM coupled with 128GB of storage is more than enough. It also has a dedicated microSD card slot to expand the storage up to 512GB. 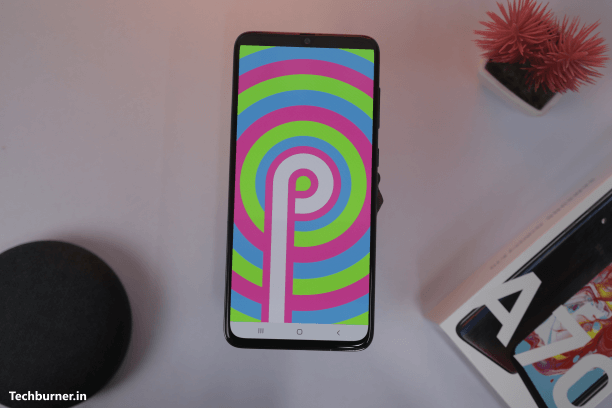 The software inside is the latest One UI on top of Android 9.0 Pie. One UI is snappy and it feels much snappier on the A70 than another budget smartphone by the Samsung. From Navigation gesture to multitasking, there is no problem at all. 675 is a pretty capable processor for the PU related task and even Adreno 612 GPU does not disappoint. One UI optimization is so good.

The battery life and charging speed of the  A70 is quite impressive. The 4500 mAh battery easily last for the entire day for heavy users while it can last for almost two days for normal users. The screen on time is nearly 7 hours which is nice considering it has 6.7” display. The Snapdragon 675 is an 11nm chipset which also helps to save a little bit of battery and the One UI is also well optimized for the battery life as well. The 25W charger is included in the box. It can full charge phone in around 2 hours or less than 2 hours. 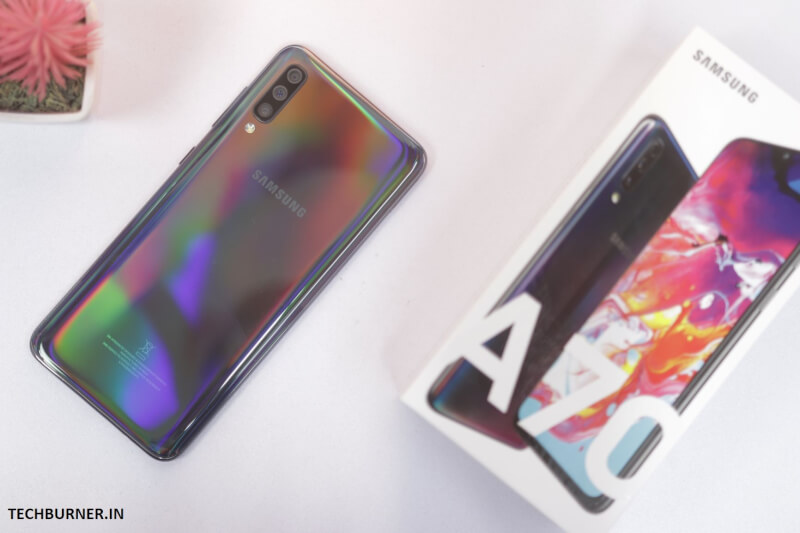 Verdict – Should You Buy It?

Let’s now come to the conclusion. Why did we call it failed masterclass? 6.7″ Super AMOLED panel is vibrant and colors look punchy. The sound output is good too. No complaint about battery life and charging speed. The Snapdragon 675 along with the well optimized One UI makes the phone smooth. The camera is not the best but good. Especially the addition of a wide angle lens is always welcome. It is a perfect phone for media consumption. Big Display, Better battery life and smooth performance along with Widevine L1 support. This is the reason why we called it masterclass.

The only problem here is the price to performance ratio. Redmi Note 7 Pro offers similar Snapdragon 675 at around the half price of the A70. Also, the Realme 3 Pro has the 710 and the Flagship killer Poco F1 offers Flagship Snapdragon 845 at just 20k. 29k for the midrange 675 is not a good deal. It does not mean that the performance is not good, it is so good. Also, the camera is not impressive. It is not bad of course, but there are so many good camera phones available at very less than 29k. Samsung should price it somewhere lower than 25k to make the competition even tougher.

Although, if you don’t care about the Performance and Media consumption is your topmost priority then A70 is a very good option, no doubt at all.