Samsung India’s first launch of the year: The Galaxy M series is here. The Galaxy M10 and M20 are the first smartphones of the series. The M series focuses on budget and value for money. But is it really value for money and ready for the competition based on the specs and pricing? Let’s find out.

The budget-friendly one, Galaxy M10 doesn’t hold back in power. Specs are: It features a 6.22-inch HD+ ‘Infinity-V’ display which means a tear-drop notch with really thin bezels on all the sides of the display.

Galaxy M10 is powered by a 14nm 1.6Ghz Octa-Core Exynos 7870 SoC. It’s an old chipset also present in Samsung Galaxy J7 and J6 which gives similar performance to a Snapdragon 625. Although SD 625 is slightly faster because of 2.0Ghz clocking.

M10 sports a 13MP primary lens (F1.9 Aperture) with 5MP 120-degree wide angle Dual Camera Setup on the back. There is a 5MP Selfie camera on the front with In-display flash feature.

Samsung Galaxy M10 features a 3400mah Battery, Android 8.1 Oreo with Samsung Experience 9.5 UX (Pie Update expected by Aug 2019) and memory expandable to 512GB. The phone lacks a fingerprint scanner but has a face unlock. It has Wideline L1 support for HD content streaming. It also has a micro-USB port to charge and data transfer.

The mid one, Galaxy M20 has some great specs to offer. 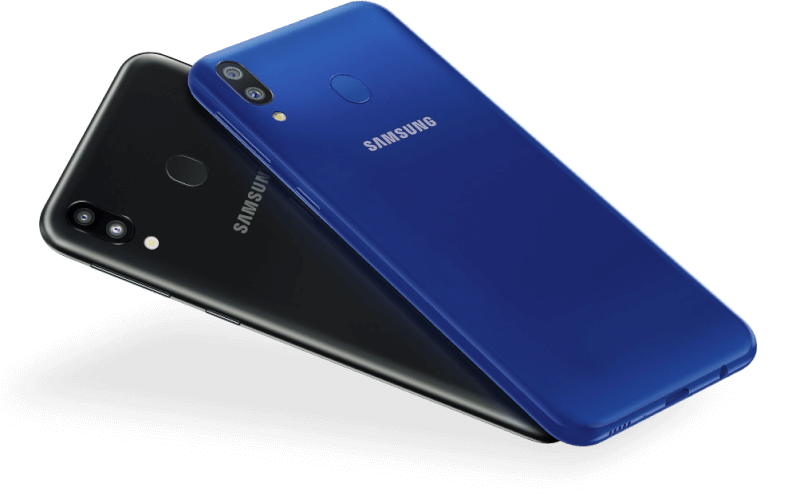 The Galaxy M20 is powered by a 14nm 1.8Ghz Cortex A73 Dual-Core + 1.6Ghz Cortex A53 Hexa-Core Exynos 7904 SoC. It’s a brand new chipset with Mali G71 MP2 GPU which is expected to give slightly better gaming performance than a Snapdragon 636 which is present in phones like Redmi Note 5/6 Pro and Asus Zenfone Max Pro M1.

Samsung Galaxy M20 features a whopping 5000mah Battery! Android 8.1 Oreo with Samsung Experience 9.5 UX (Pie Update expected by Aug 2019) and memory expandable to 512GB. The phone has a fingerprint scanner on the back as well as a face unlock. Along with the Wideline L1 certification, the M20 also has a Dolby Atmos support for sounds that aren’t coming out of its own speakers like for Bluetooth speakers and regular Headsets.

Samsung decided to give the M20 a Type-C port with quick charge support which is a huge step up. It comes with an In-Box 15W fast charger which according to Samsung provides “3 times faster charging”. FYI Samsung, nobody uses a 5W charger!

Both the phones will go on sale starting February 5 on Amazon.in and Samsung India’s Online Store.

Jio Users exclusively get the Double Data Offer which provides double data on Rs199 and Rs299 packs. Savings worth Rs 3110 for 10 recharge.

Do you think Samsung will be able to give competition to Realme and Redmi Smartphones? Tell us in comments!