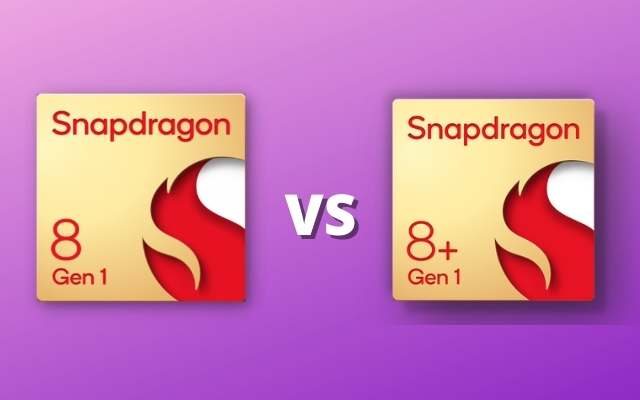 First, we will do a CPU comparison of both the Snapdragon 8 Series's flagship chips. With almost the same specifications, both CPUs feature ARM's newest v9 architecture (64-bit), which promises to boost the performance and save battery in your phone. The only difference is Qualcomm has used the TSMC's 4nm process rather than Samsung’s technology to build Snapdragon 8+ Gen. According to them, it will resolve the heating problems. 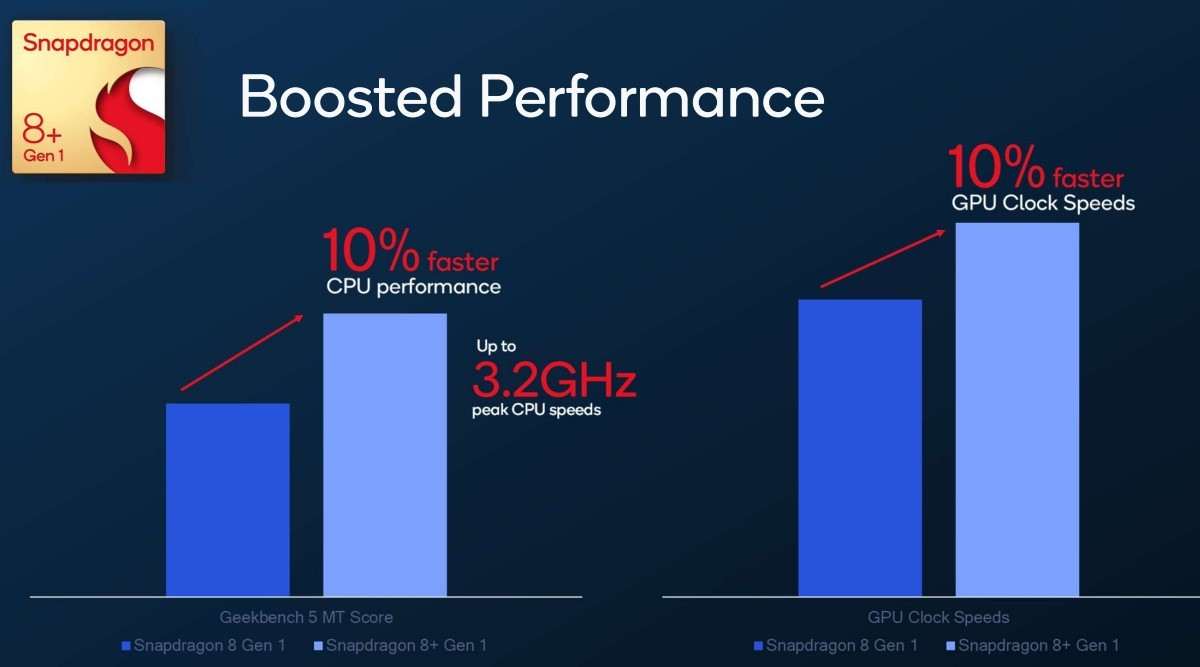 Snapdragon 8 Gen 1 has one Cortex-X2 (3GHz) core, three Cortex A710 (2.5GHz) cores, and four Cortex A510 (1.8GHz) cores. Snapdragon 8+ Gen 1 has the same cores, only the Cortex-X2 core is clocked at 3.2GHz. This signifies that the CPU's performance has increased by 10%. Also, Qualcomm stated to add a power efficiency boost of 30% in the new chipset. So that it may provide an extra 5.5 hours of conversation time, 50 minutes of social media app usage, and 17 hours of music playback. With Snapdragon 8+ Gen 1, Qualcomm has clearly stepped up its game and appears to solve the power efficiency issue.

Next, we will talk about GPU in the Snapdragon 8 Gen 1 vs Snapdragon  8+ Gen 1 comparison. Both include Qualcomm's Adreno 730 GPU with Snapdragon Elite Gaming and HDR gaming support. Qualcomm claimed to increase the GPU clock speed by 10% and reduce GPU power usage by 30% on the new chipset. But there are no official specifications. Thus the gamers will like the Snapdragon 8+ Gen 1's GPU performance and power efficiency because of the lowered heating and thermal instability problems. 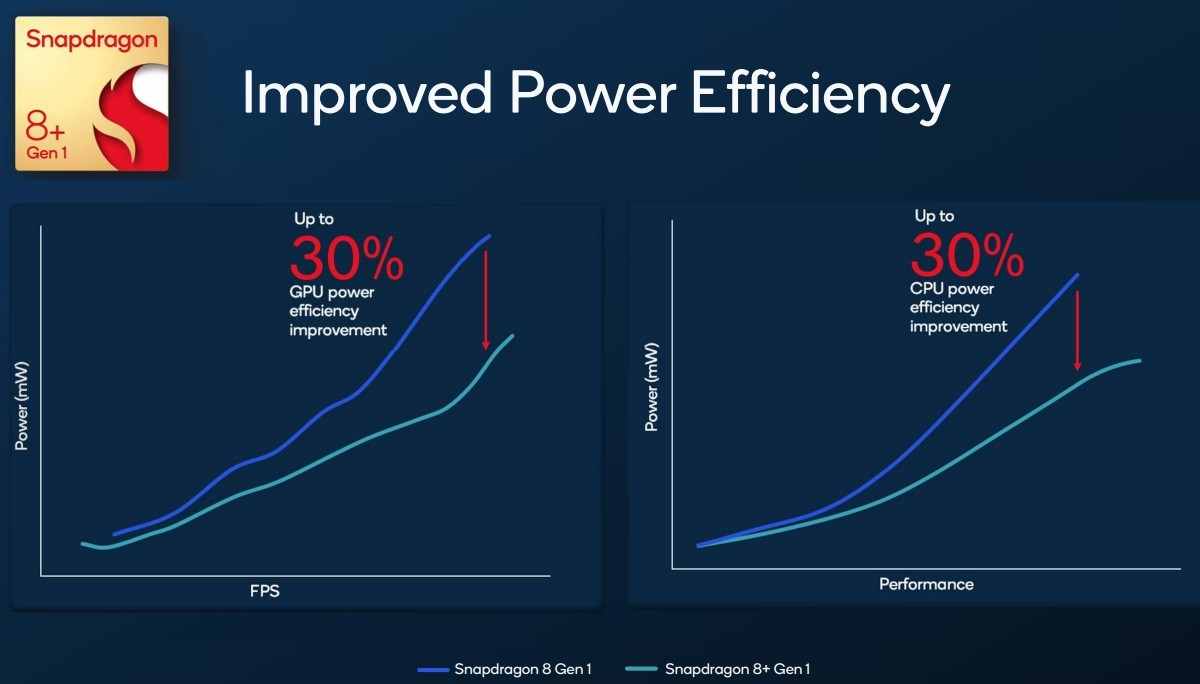 Both the Snapdragon 8 Gen 1 and the Snapdragon 8+ Gen 1 have comparable triple 18-bit image signal processors (ISP). It can record 3.2 gigapixels per second and handle 200MP sensors. You may simultaneously record 8K HDR films at 30fps (4K at 120fps) and take a 64MP snapshot with no shutter latency. It can record 30 photos in a second for low-light photography and blend them to create a brighter, more visible image. To eliminate noise in captured photos and videos, the triple ISP also supports staggered HDR, multi-frame capture, Dolby Vision, and triple exposure.

Comparison Of AI and ML Features 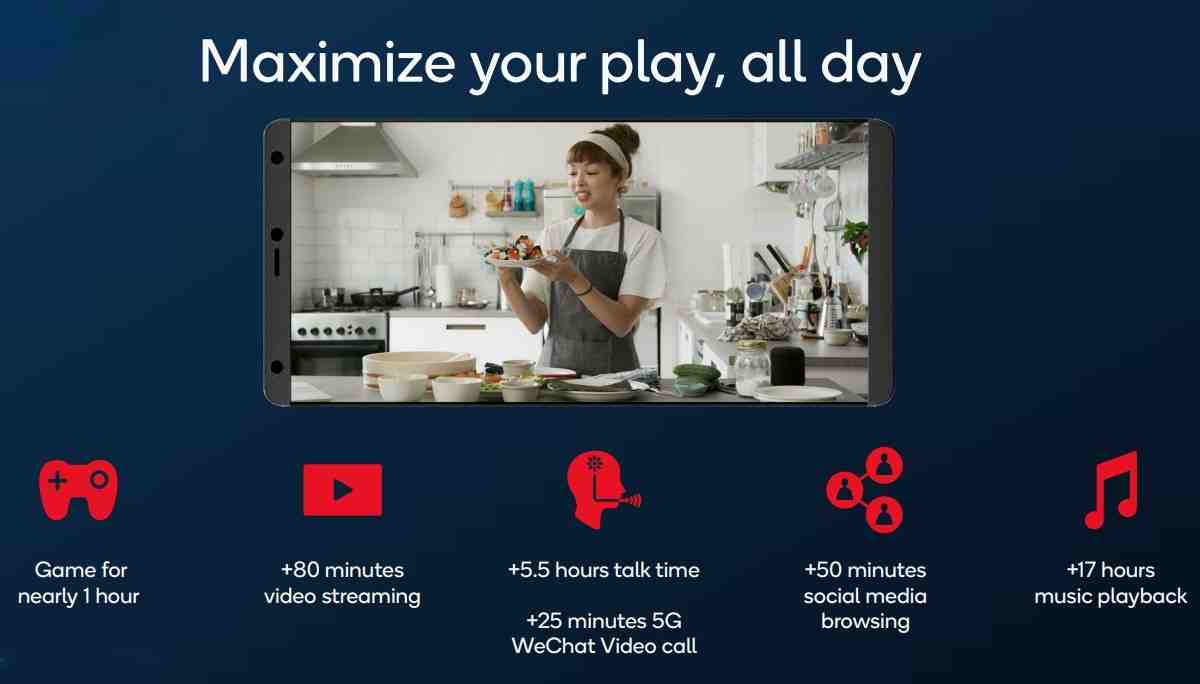 Qualcomm has included the same 7th-generation AI Engine on the Snapdragon 8+ Gen 1, the same as 8 Gen 1. Though we have not got its TOPS statistic, the AI engine can perform 27 trillion operations per second and gives 13 TOPS for INT16 operations. Therefore, the new chip provides 20% greater performance per watt, extending the battery life. It also has Qualcomm's 3rd-generation Sensing Hub, which provides a low-power AI system for low-power workloads. The new architecture can effectively provide AI experiences while enhancing thermal efficiency.

Both chipsets have Qualcomm's latest Snapdragon X65 5G modem on their logic board. It supports additional networks, frequencies, and bandwidths internationally and can give speeds up to 10Gbps. The 5G modem also supports carrier aggregation. Both processors include Qualcomm's FastConnect 6900 Mobile Connectivity System, which supports Wi-Fi 6 and 6E with rates up to 3.6Gbps. The new chipset now has compatibility with the latest Bluetooth 5.3 standard, LE Audio, and Qualcomm aptX Lossless technology.