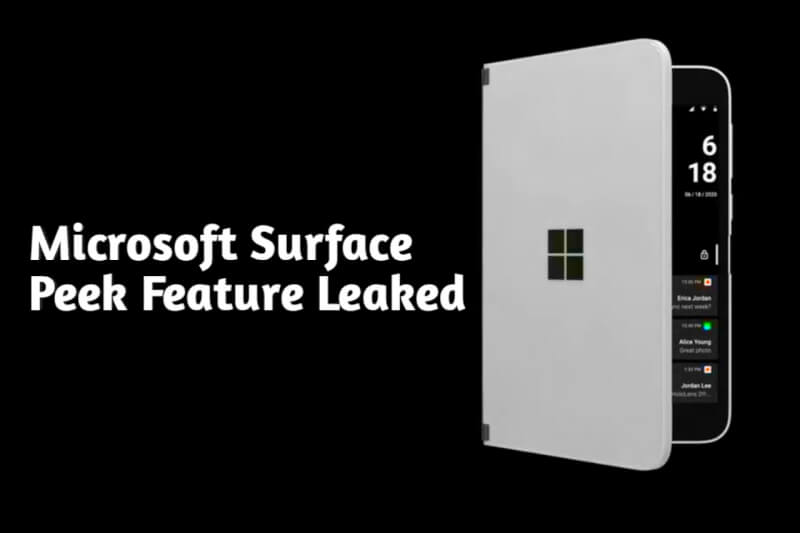 In two short video posted by the Twitter user WalkingCat, we get a new look at how you will be able to potentially glance at the notification without having to open up the dual-screened phone. The second video show how taking a phone call will work with Microsoft Surface Duo. It seems like when you get a call, you can open the device slightly & the peek feature will show you who’s calling.

The notifications will appear on the right-hand side, so the user can view and dismiss the notifications without fully opening the Surface Duo. This feature comes in handy. Unlike the Moto Razr 2019, Galaxy Z Flip and Galaxy Fold, there is no secondary display on the outer side, hence it makes a lot of sense to add Microsoft Surface Duo Peek feature.

According to a recent report, the Microsoft Surface Duo is running Android 10. It will be alleged to have a snapdragon 855 Processor with 6GB RAM & 64 GB Storage for the base model.

Another confirmed feature the surface duo will have two 5.6 inch screen, which when unfolded can work as an 11.2-inch tablet.

The Microsoft Surface Duo presented by Microsoft only appeared to have a single camera, located on the top-right screen.

Here are the specs of the Microsoft Surface Duo: Surface Neo will be more powerful and it will run on Windows 10x OS.

Microsoft has announced that the Surface Duo will arrive in Summer Seasons 2020, which for means we should expect a release around May & June 2020. There is no official confirmation on the India launch. Many foldable phones are coming to India, so we can expect it to be launched in India. We will get more information about the India launch in future. Stay tuned with us to get the latest update.

Microsoft did not reveal the price of Surface Duo but with dual-screen, it’s not going to cheap.

Share your thoughts on Microsoft Surface Duo and Surface Neo in the comments down below. Stay Turned To TECHBURNER For More Stuf