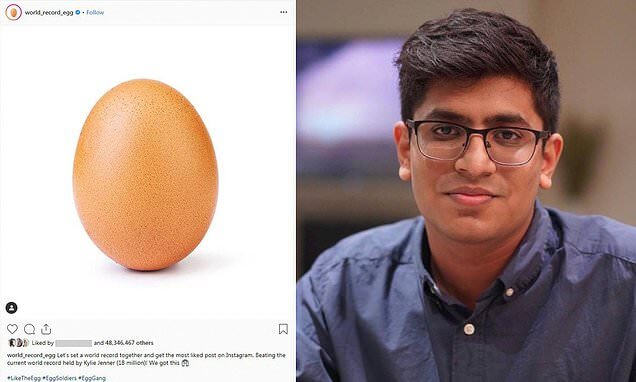 Hey! Have you followed World Record Egg on Instagram? If not, then just go and follow the page. Wait, let me tell you why you should do so.

Let’s set a world record together and get the most liked post on Instagram. Beating the current world record held by Kylie Jenner (18 million)! We got this 🙌 #LikeTheEgg #EggSoldiers #EggGang

So few of the netizens searched for the owner of the page and found out that it was a 19 Years Old Indian boy, Ishan Goel.

But few are saying that original credit must go to the Chicken which produces the Egg. But Ishan’s secret trick helped it to reach the Internet World.

Ishan Goel posted the photo on 4th January. He just wanted to cross the highest likes on Instagram, which Kyle Jenner had previously.

Ishan said that he had posted this photo on Instagram and send the link to his Reddit Community of Influencers, Celebrities and most importantly his friends.

Soon many of the Influencers and Celebrities started Following the account and sharing it. Suddenly one day the likes on the photo crossed the 18 Million mark. And one day it finally crossed 48 Millon likes.

Here comes another incident. Indian singer Diljit Dosanjh posted a video to his idol Kyle Jenner and told her to be ‘tension-free’.