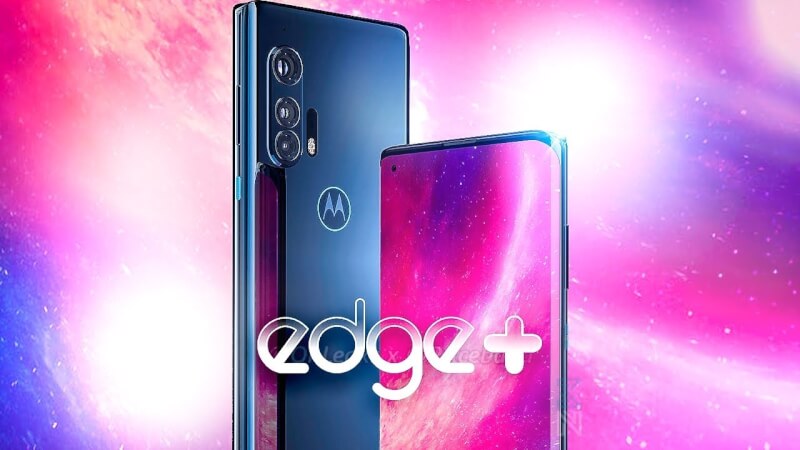 The New Motorola Flagship Device is on its way to get Launched very soon. This Smartphone is like the Galaxy S6 Edge, which had a Curved Display. The New Moto Edge+ also looks the same. This Design is called the Waterfall Display design. We have previously covered the Moto Edge+ Specs and Price in India. Now, there are a few new Moto Edge+ Renders Leaked Online. We have received them and made an Article on them. We will also be talking about Moto Edge+ launch date in India. The device might be powered by the latest Qualcomm Snapdragon 865 SoC, which is a high-end SoC integrates a fast ‘Prime Core’ that clocks up to 2.84 GHz and three further fast ARM Cortex-A77. It is expected to start with 8GB of RAM and 128GB of storage. It will be coming with the in-display fingerprint sensor, which will help in the authentication.

Moving onto the next part of the phones that is Internal parts. A Qualcomm Snapdragon 865 SoC will power the phone. And we will see the 5G connectivity in Moto Edge+. It will be the first phone from Moto offering 5G connectivity. The 6.67-inch FHD+ AMOLED panel will feature the refresh rate of 90Hz, which is quite impressive.  Talking about the memory, it is expected to start with 8GB of RAM and 128GB of storage. The actual Camera setup, we should see 108MP Sony IMX686 or either it could be Samsung ISOCELL Bright GW1, which will be assisted by wide-angle, telephoto, or macro lens. The battery is going to be a 5170mAh unit which can be charged by 27W fast charger.

The official launch date is not out yet. Motorola Edge Plus is expected to be launched on March 24, 2020. Stay tuned with us to get more updates on Moto Edge+ Launch Date in India.

Moto Edge+ Price in India is expected around 50k rupees. However, there is no official confirmation on it. Stay tuned with to know more about the Moto Edge+ price in India.

So, how do you find this Leaks? Let us know in the comments below. Till then, follow us on Instagram @techburnerteam.