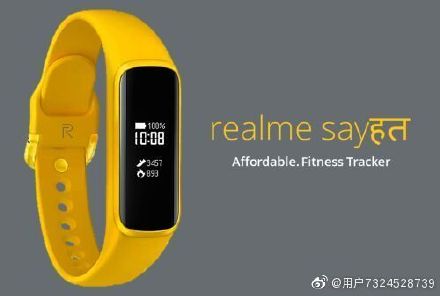 Realme had showcased the new upcoming Realme band at the Realme 5i launch event in India, the yellow-colored strap was showed off with a rectangular display, as we know Realme has been targetting Xiaomi and Redmi in all the categories and aiming to be the No.1 brand in India and Xiaomi with its Mi Band has currently captured the budget smartwatch segment. Now it is officially confirmed that the new Realme band will be called the Realme Sayhat and will take on the Mi Band’s in India, keep reading this article to know more.

Realme recently started to roll out the official stable updates of their new RealmeUI, which has been claimed to offer a close to the stock android experience and brings significant visual changes on the front along with some performance upgrades, original wallpapers, sounds, and animations have also been added. Still, now as per an image shared by a tipster on Weibo, the Realme band will be called Realme Sayhat and will launch in India first.

This new band will have a yellow-colored strap. At the same time, it may sport some other color variants as well, and the latest fitness band will also come with a touch screen display with its screen size less than an inch, be rectangular in shape and have step counter and calorie-burner counter for sure, this can be confirmed the display on the leaked image which shows the total number of steps taken along with the number of calories burnt in that particular day.

The same tipster also mentions that it may lack out on a heart rate sensor to drop the price similar to the Mi Band 3i, and also, the band may have a bigger brother with a heart rate sensor and some other additional features. While there is no other information on this upcoming band either on the specifications or the pricing, we will have to wait for some time to get some precise information from the company.