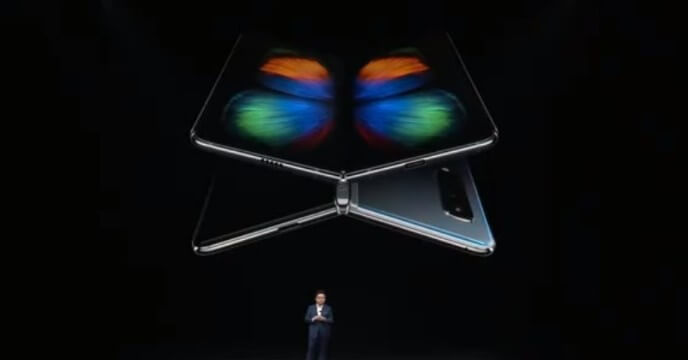 Samsung today launched its latest batch of Galaxy devices. The most exciting and most anticipated of which was the new foldable device, previously Samsung showed a glimpse of the same foldable device, but this time the phone has been launched officially, as Samsung Galaxy Fold. The Galaxy Fold is a very promising tablet-smartphone. It has the potential of creating a new category in the industry, very much like the Galaxy Note did several years ago.

The Samsung Galaxy Fold has a 4.6 inch display when closed for one-handed phone usage. When opened, the Galaxy Fold has a gigantic 7.3 inch which gives it the tablet form. The 7.3 inch screen is two screens stacked side by side. The hinge doesn’t seem to be interfering with display. While the type of screen wasn’t specified to be OLED, the device looks phenomenally beautiful.

The hinge is arguably the most important part of a foldable device. Samsung has used its smarts in this area as well. Samsung has claimed that the hinge on the Galaxy Fold is designed to be seamless when it comes to folding and unfolded. The hinge is also expected to be exceptionally durable. Also, Samsung has given buyers the option to have matching hinges according to the color of the device, which are black, silver, blue and green.

Samsung has heavily optimized the Software for the Fold form factor. There can be simple actions done on the one-handed screen and things like watching videos can be done on the larger screen inside. However, where Samsung has really upped the game is how the two screens converse. Samsung has partner with Google and Android developers to optimize the software experience.

For instance, An app can be running in the smaller screen and can translate seamless in the tablet form when the larger screen is opened. Google Maps was shown as an example. The same goes for YouTube and other Apps. Another exciting feature is the three  apps multi-tasking. As the name suggests, three apps can be simultaneously used in this state. One app runs on a large window while two other apps can run on two smaller windows.

There are a total of 6 cameras present in the phone. Three on the back. One in the front and two camera is present inside, when you will use Samsung Galaxy Fold as a tabler. So Samsung wants you to be able to take photos in every mode of the device. Like Samsung’s other flagship offerings, the cameras should be at the very top tier on this phone as well.

Samsung Galaxy Fold has 2 batteries, one on either sides of the hinge. The full capability of the battery is 4380 mAh. It would last long a day on heavy use and capable too last long up to one and half day on normal  use.

The processor used in Samsung Galaxy Fold is a 7nm SoC with 12GB RAM which should be adequate for a phone that is breaking a whole of new boundaries. It also comes with UFS 3.0 storage.

The Samsung Galaxy Fold has been launched as a luxury devices and is aimed at the ultra-high end market as it is priced at an enormous $1980. It will come with a pair of Samsung’s Galaxy Buds and will be available from April 26th. The phone will be available in both LTE and 5G models.