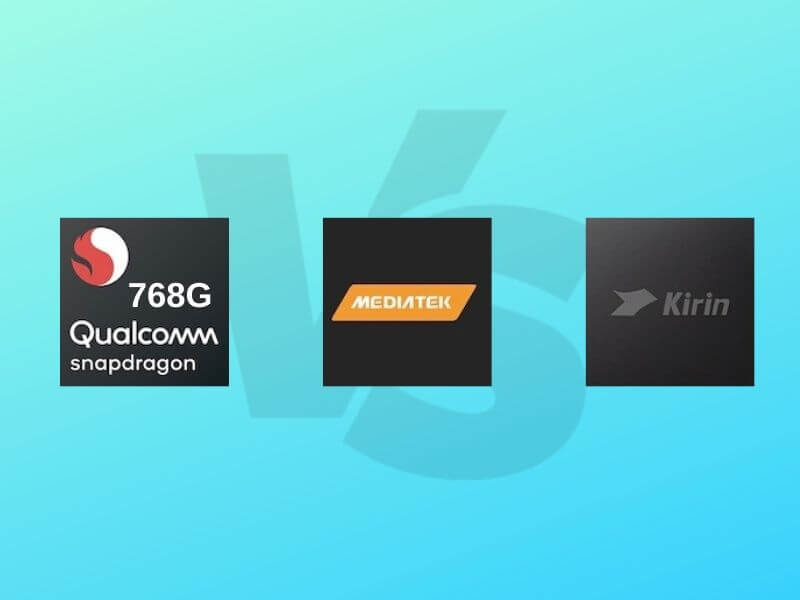 There are over 3.5 billion active smartphone users in the world. Each smartphone runs on a mobile processor developed with millions in R&D, be it a high-end or a budget SoC. There are many myths about smartphones that people believe easily without even thinking about it. Do you believe too that high RAM implies high speed? It doesn’t! Your phone’s speed depends on its processor. RAM only ensures that you can run multiple heavy programs simultaneously without running into any trouble. Generally, mid-range smartphones and processors grab most of the market share. The three most prominent budget processors in the current race are Snapdragon 768G processor, Kirin 820, and MediaTek Dimensity 820. In this article, we will do a comparison of Snapdragon 768G vs Kirin 820 vs Dimensity 820. We will also talk about Kirin 820 benchmarks and Snapdragon 768G benchmarks. Let’s get straight into the comparison.

Kirin 820 is a mid-range 5G-enabled processor. It holds both non-standalone and standalone designs with TDD/FDD full-frequency bands for a better experience. Also, it is equipped with the Huawei-designed Da Vinci NPU, which enhances the use of Artificial Intelligence by 73% with less power consumption. The Kirin 820 comes with great must-have features, like image noise cancellation, clear night photos, and more. Let’s know more about Snapdragon 768G processor.

MediaTek Dimensity comes with premium ARM cores. It supports HyperEngine 2.0, which delivers the best gaming features to enhance the gaming experience. Moreover, Dimensity 820 comes with four Arm Cortex-A76 cores clocked at up to 2.6GHz and four Arm Cortex-A55 cores with up to 2GHz speed.

We have taken a quick look at all three processors. Now, it’s time to know more about the vital parts of the processors. We have divided this comparison into four different criteria – CPU, gaming performance (GPU), battery life, and memory. Let’s start with Snapdragon 768G vs Kirin 820 vs Dimensity 820 CPU comparison.

Coming over to the Snapdragon 768G vs Kirin 820 GPU part, we get Qualcomm Adreno 620 with 7nm of the fabrication process in 768G. Snapdragon 768G processor also gives users an elite gaming experience with its enhanced gaming graphics. Further, Kirin 820 supports 6-core Mali-G57 GPU with 7nm of fabrication. Less fabrication means better performance. With that, we also get Kirin Gaming+ 2.0, which supports an amazing gaming experience. If we compare Kirin 820 vs Dimensity 820 GPU, both processors are equally decent.

Which Is The Most Powerful?

We have looked at each factor of all three processors. If we look at the CPU, GPU, and memory Kirin 820 is more powerful and enhanced and its Snapdragon & MediaTek counterparts. In terms of CPU, it has more cores. In addition, if we look at the GPU, Kirin 820 gives an amazing performance with its 6-core Mali-G57 GPU. Although battery efficiency is less than the Snapdragon 768G, still it is performing far better on other criteria. The close second in this race is the MediaTek 820 because of its upgraded cores and GPU performance.

That’s all for this article. Don’t forget to tell us which one you like among the Snapdragon 768G vs Kirin 820 vs Dimensity 820.