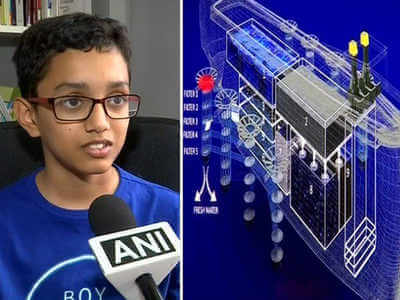 As we all know that pollution is quite widespread today and this is not limited to oceans and seas. Industrial waste, Domestic waste, and others have contributed a lot to ocean pollution. We are not quite aware of it but Haaziq Kazi, a 12-year-old boy from Pune is and keeping that in mind he has designed a ship to clean the garbage from the oceans.

I watched a few documentaries and I thought of doing something. I felt the dangers of the increasing ocean pollution and its effect on marine life and to overcome this I came up with the idea of this ship, ERVIS” said Haaziq in an interview with ANI.

Haaziq Kazi has presented his ideas on large international forums and has been well appreciated. We expect more intelligent minds like him who are concerned about the surroundings and want to do something, more than their generic science projects and take the name of our nation to great heights. KUDOS to Haaziq for his achievements and his intelligence.

Join our Telegram Channel for more updates!
Related Topics:Haaziq Kazi
Up Next

PUBG Banned in Gujarat Schools. Here are the details.