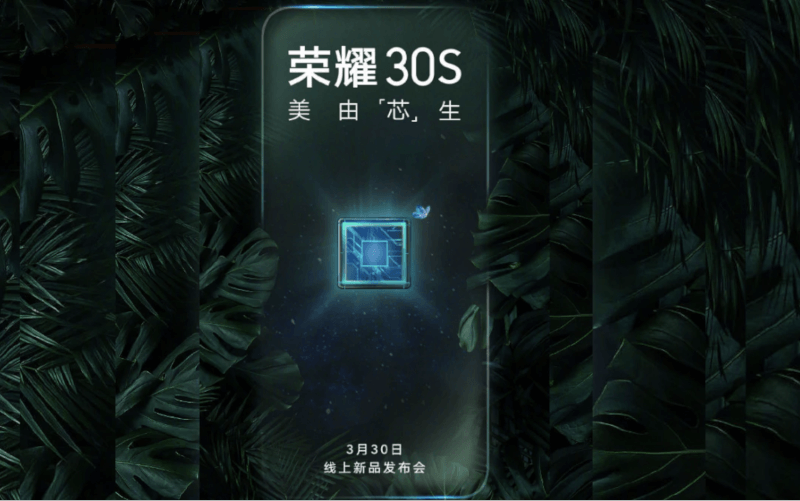 Huawei’s sub-brand Honor is planning to launch its all-new Honor 30s in China by the end of this month. This would be a mid-ranged smartphone, and initially, it will launch in China, but later the company is planning to launch the phone in the international market. The company announced Honor 30s Launch Date on a Chinese micro-blogging website, Weibo. Read the full article to know about Honor 30s Specs. We will also be talking about Honor 30S Launch date in India and Honor 30S Price in India.

Here are some expected specifications of the Honor 30S.

The teasers reveal that the phone will come with a notch-less and Bezel-less display with a hole-punch camera. For the battery, the phone might be using a 4100 mAh Li-Po battery with a 40W fast charge support with 10V and 4A power configuration.

As for the camera, from the renders, we could see that there is a quad-camera setup which is similar to what we saw on Samsung Galaxy S20. We are still not sure what kind of quad-camera set up the company is planning to use.

Honor 30s was spotted on China 3C mobile certification site and the site listed that the phone supported 5G and the rumours suggest the company will be using none other than Kirin 820 Chipset which was made on Mali G77 GPU and supports 5G. On the software side, we are still not sure what will happen, but we are sure that it will launch without Google Services. There are also possibilities that we could see this device with Huawei’s AppGallery, which is an alternative to Google Play Store, just like what the company did with its 9X Pro and View 30Pro. This AppGallery is available in more than 170 countries, and Huawei also claims that there are 400 million monthly active users.

The announcement made on Weibo by the company suggests that the phone will launch in China on 30 March 2020. And later in the international market. Stay tuned with us to get more information on the Honor 30S Launch date in India.

There is still no confirmed information about the price but, it is expected to launch around 25k INR.