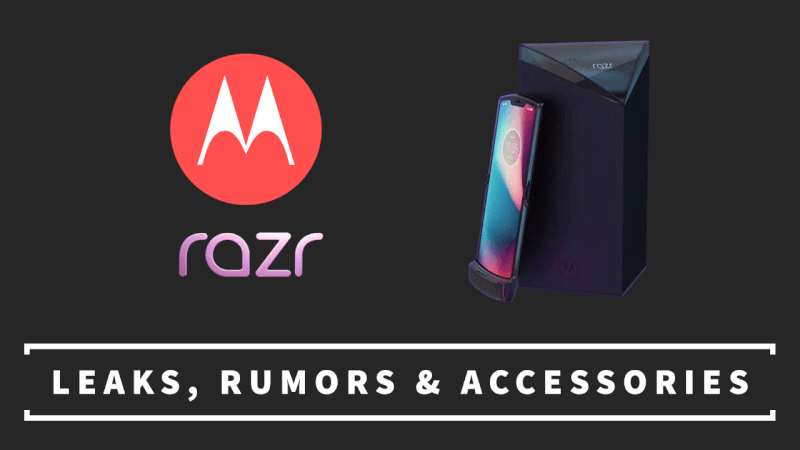 Foldable phones seem to be all the rage in 2019 so far. First we were awed by Samsung Galaxy Fold. Then, it was soon outshone by Huawei Mate X. And the Galaxy Fold turned into a huge disappointment as soon as it got in reviewer’s hands. And now, Motorola is in the news as the renders for the upcoming Moto Razr have allegedly leaked online. The fact that the new Moto Razr is in the works is already widely known. However, these renders give us some stunning new revelations about the phone.

Moto Razr : Everything We Know

We know that Motorola has filed for a patent for a phone that has striking resemblance to leaked renders. Also, the company is willing to ride the nostalgia path for the design if the phone, as the renders look fairly similar to original Moto Razr, with the hinge slightly visible. Moreover, this could be the right time for Motorola to release a folding phone, since the hype is really high.

Not much is known about the specs of the upcoming phone, or exactly when it is coming, for that matter. Nonetheless, if the phone is come out in 2019, it is very likely that it will pack top-of-the-line high end specs. We expect it come with Snapdragon 855, a triple camera setup and a battery good enough to support the folding contraption. As seen in the renders, the screen will be rather tall.

What The Leaks Say

The renders leaked on Chinese micro-blogging site Weibo and were spotted by Slashleaks. The pictures cannot help ascertain whether these are actual pictures or just renders.  However, what is clear is that if the final product is anything like the leaks, the Razr will be different from other folding phones we have seen so far. Also, the renders portray the packaging the phone will come in. That too, looks quite unconventional.

First things first, the leaks show that Razr will not be a smartphone-tablet hybrid. What we see here is a really tall screen with a hinge around the middle. There could another screen on the other side after the phone is folded, but that can’t be confirmed by the renders. Also, Motorola isn’t planning on getting rid of the chin. In addition to that, there’s a notch at the top. While the notch isn’t the kind of thing you’d want to see on a foldable phone, the tall screen can more than make up for it.

According to the leaks, the phone will come in a tall packaging, which contains a plethora of accessories. There’s a visible dongle for USB-C to headphone jack, this means the phone itself wouldn’t have a headphone jack. There is also what looks like a case. There are also a few more accessories.

While these leaks show a lot of exciting stuff, some are a bit skeptical of the legitimacy of these renders. Part of the reason is its exact similarity to the patent sketches. Concept renders are pretty easy to make based on sketches. Also the leaker is not a known credible source and has supposedly deleted the photos now.

So what do you think? Are these renders real? Real or not, stay tuned to Tech Burner for updates on this story and more!