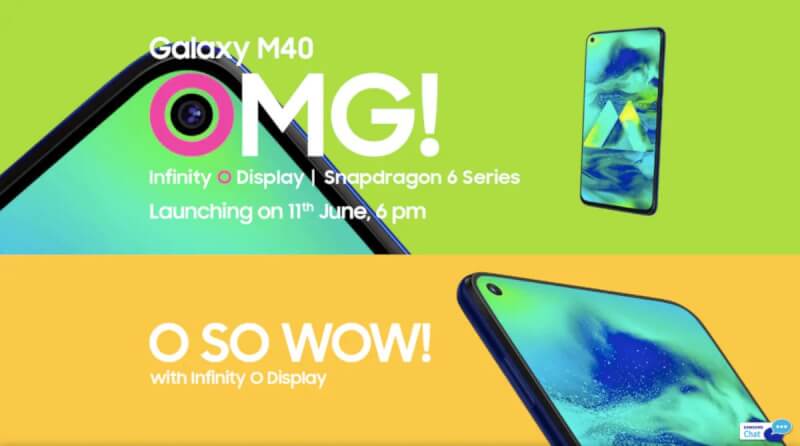 Samsung Galaxy M40 is launching on 11th June in India at 6 pm, i.e. today. Samsung has been teasing the M40 a lot since the last few days and there is a good hype building across it. They have hinted about many features and there are a lot of spec leaks of the Samsung Galaxy M40 too.

The Samsung Galaxy M40 is the fourth smartphone in the popular Galaxy M-series. It will slot above the Galaxy M30 as far as the hierarchy goes. The company recently said that it plans to launch the Galaxy M40 with a price tag around Rs 20,000. With the kind of specs M40 is offering and the right track in which Samsung is moving, this might be a market killer.

Like all the M- series phones of Samsung this year, Samsung Galaxy M40 will also be sold online and exclusively. This is the reason why these phones are priced cheaper than other series. It will be available in the Samsung online store and AMAZON India. Sale date will be announced today at 6 PM.

Samsung Galaxy M40 will be coming with an Infinity-O panel or in layman’s terms, hole-punch display. This is the first in this price segment. Although the panel might be LCD judging by the similar specs A60 launched in other countries.

Samsung Galaxy M40 will be the first phone in M series to come with a Snapdragon processor. So, google camera support might be on its way for this M40. Everyone is expecting 675 which is not yet confirmed by Samsung. Since the A70 comes with Snapdragon 675 at Rs. 28,999/-, I doubt it might come with Snapdragon 660 to maintain a gap. But, who knows Samsung might pull a surprise for us!

Samsung Galaxy M40 will come with a 32MP shooter:

Samsung has confirmed primary 32MP shooter in the M40. Other cameras will be wide angle and depth sensor.  Since it’s Snapdragon, Google camera might be on its way!

The only disappointment, aside from a lower battery, is the headphone jack. Based on the A60 of other countries, M40 might just ditch the HEADPHONE JACK! This might be a deal breaker in this segment as most of the audience buying Rs. 20k phones do not prefer wireless earphones which cost a lot higher than wired ones! Tell us what you think about it.

1 thought on “Samsung Galaxy M40 – All you need to know before the launch today!”