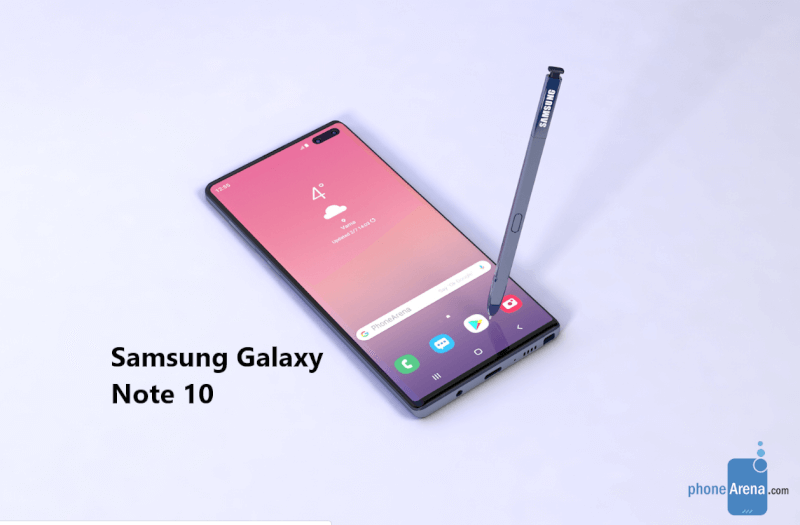 Talking about the design of the Note 10, as far as PhoneArena’s 3D render suggest Dual elongated punch hole cutout on the front same as Samsung Galaxy S10 Plus. As rumors suggest the display will be 6.7 inches Super AMOLED panel. The functional stylus S-Pen will definitely there.

There is no difference between the processor of S lineup and Note lineup of Samsung. Hence, Note 10 will be powered by Exynos 9820/Snapdragon 855 processor with up to 12 gigs of ram and up to 1 TB of storage. Same as the Galaxy S10 5G, Note 10 will have a 5G model as well. The battery capacity will be better than S10 Plus around 4500 mAh. It can come with UFS 3.0 storage same as Samsung Galaxy Fold.

Galaxy S10 5G have the quad camera setup on the back. Therefore we can expect the quad camera on Note 10 too. Now, there is no update whether Note 10 will have the same camera setup as S10 5G or not. S10 5G on the rear packs a 12 MP primary camera (f/1.5-2.4 aperture), 12 MP camera (f/2.4 aperture) telephoto lens, a third 16 MP (f/2.2 aperture) Ultrawide lens, and a fourth TOF (Time-of-Flight) lens. On the front, the Galaxy S10 5G packs a 10-megapixel primary camera with an f/1.9 aperture and a second TOF lens. Samsung Galaxy S10 5G Camera supports Video bokeh and 3D light depth. It is interesting to see which camera setup does the Note 10 packs.

Generally the S series flagships of the brand launch in the starting of the year and Note series at the end of the summer. Samsung could launch the Galaxy Note 10 in early August.

Stay tuned with us to get the latest update about Samsung Galaxy Note 10.