As we know, The Samsung Galaxy S20 Series of the lineup is now all around the internet. But there is even more stuff apart from the  S20 series which is going to be launched. Namely, the Samsung Galaxy Z Flip, a new folding phone from Samsung which going by the name will fold in thrice in a Z Shaped module. While it has been trending on the internet for quite some time, now some of the specifications of the device have been leaked and what it shows up is it will be using an old generation processor from Qualcomm.

According to a report from XDA Developers, the upcoming Samsung Galaxy Z Flip sport a 6.7-inch Dynamic AMOLED Display. Some rumours also suggest it will be the same panel as used on the Galaxy S20 Series. While some suggest instead of using the old gen glass panel, Samsung will be using the recently patented “Ultra-thin Glass”. On the performance department, Samsung has decided to go with the previous year’s flagship Snapdragon 855+ Chipset. We have already seen this chipset on multiple phones, and it is quite powerful but will not be able to match the current Snapdragon 865 processor.

Additionally, the Galaxy Z Flip will have a 1-inch screen on the outer panel which will supposedly be used for displaying time and as a shutter button for rear selfies. We aren’t quite sure what one could do with such a small screen on the outer, but Samsung will demonstrate it on the launch event about the usage so stay tuned. 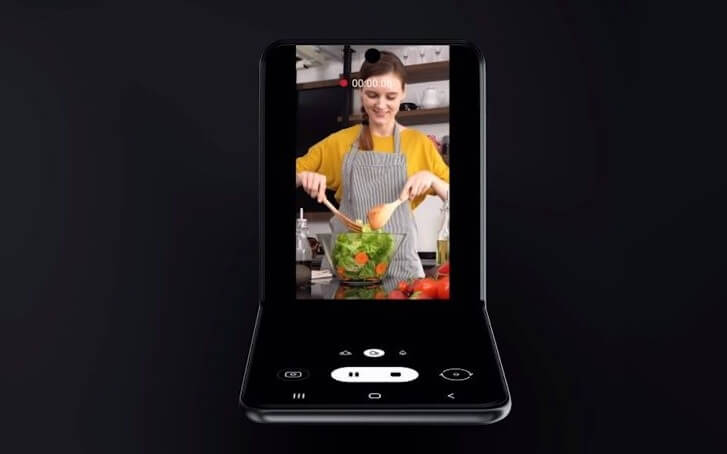 On the camera department, the Samsung Galaxy Z Flip will reportedly sport a dual 12-megapixel rear camera on the rear. It will have a 12MP Primary Sensor + a 12MP Ultra-Wide-Angled Lens, On the front, the phone uses a 10-megapixel selfie camera for taking selfies.

The major downside of the Galaxy Z Flip has to be its battery capacity. The battery capacity on the Galaxy Z Flip is tipped to be 3,300mah incapacity. While this seems to a small-sized on, considering the Motorola Razr Fold which just sports a 2,510mah battery, this is a considerable amount increase. We will have to test it out to know more on the battery life and the screen on time.

This new folding phone from Samsung has been rumoured to be priced at $1,500(~1,00,000 INR). While this will be an expensive phone and is not meant for the general public, Samsung hasn’t confirmed whether this phone will launch in India or not, seeing the success of Galaxy Fold we may expect this to launch in India as well.

That’s all regarding the Galaxy Z Flip Today, stay tuned to Techburner for more information.