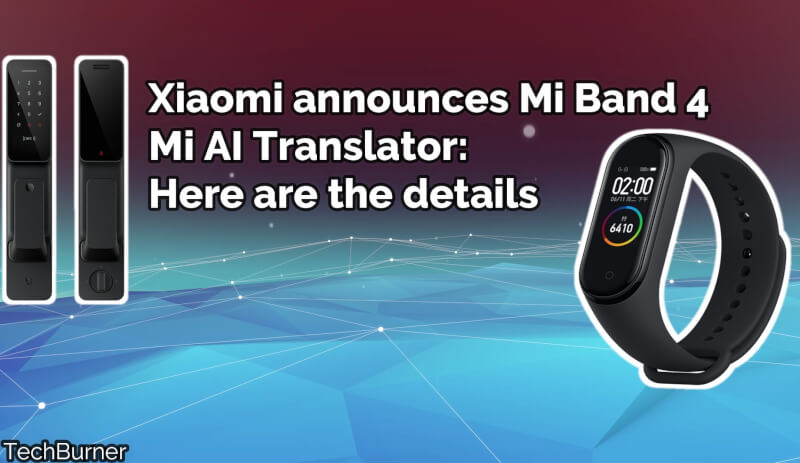 Xiaomi is one of the popular brands for its midrange phones. MI also manufactures smart gadgets, home appliances, and other things. Recently, Mi has announced some cool gadgets for you and for your home. The gadgets are Mi Smart Band 4, Mi Smart Door Locker and Mi AI Translator. These gadgets have been launched in China. You will also find How to buy these gadgets before it arrives in India. So, Read the full article to find more about Mi Band 4 and other gadgets. Also, Check Out MI AI Translator Price in India and MI Gadgets Launch date in India:

The all-new Mi Smart Band 4 comes with Colour OLED Display. It has 2.5D Glass on top which gives your Mi Band 4 attractive look. This time Mi has added a large battery by which it has longer battery life. They are providing 135mAH of battery in the Band. Mi Band is also upgraded to give you accurate foot-steps, heart rate, and calories burnt today. It comes in different variant. One for NFC Variant and other for non-NFC Variant. You can use your NFC variant for paying at shops, opening doors and much more. Mi has also added voice command for Google Assistant, unlocking your devices and in the use of Mi Pay. The new Band is waterproof upto 50M. You can also learn different styles of Swimming by the band. Later, it will support your Local Language via OTA to teach you in your own language.

The new Smart Band 4 includes all the necessary features for users. Also, a lot more features have been added to it but the pricing is not too much high. If you compare it with Mi Band 3. It comes in different variants. The non-NFC variant comes around Rs. 1700 and for NFC Variant it comes around Rs. 2499 in India.

The new exciting gadget of Mi has come. This gadget let you to translate your voice in different languages. It has support of more than 34 languages. This device has support of Artificial Intelligence by which it translate more fastly. Another reason for its translation is its pre-installed dictionaries. It has Oxford, Collin, Chinese, English dictionary which gives better pronounciation after translating. This device is made for those people who travels different places in search of different peoples. It comes in standard version as well as a 4G Version. It requires internet service to do this all activity. This is a pocket-sized device which makes it more familiar while travelling. You can also use it as a portable Wi-Fi and also translate language by images.

As the device only translate the voice in a different language and help you while traveling. Also, this all comes in a pocket-sized device. It is available in different variants. So, it’s expected pricing in India is around Rs. 10000.

Mi Smart Door Locker is a home gadgets. You can use it for locking doors. It can unlock doors by Fingerprint sensor, key, and by your Mi Smart Band 4. Yes, the all-new, Mi Smart Band 4 contains NFC by which you can use it for unlocking doors. Apart from it, there are a lot more features like it has six unlocking modes. It also shows the statuses and action of the door in real-time.

The Mi Smart Door Locker includes sufficient features to secure your home. As it also alerts the users by the real-time actions. It’s expected pricing in India is around Rs. 20000.

These devices have launched in China. People who live in China can order it from the official website of MI when the sale is started. Other people who want to buy this can order it from Alibaba. But, We recommend you to wait till the launch. So, it is expected that Xiaomi will launch this device before August.