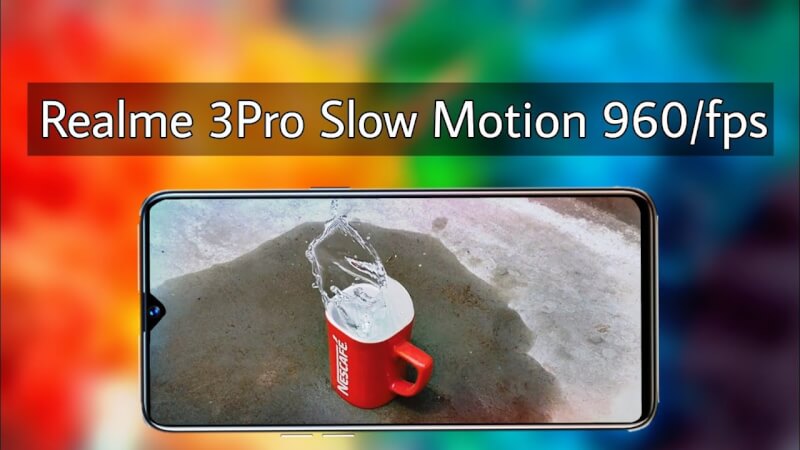 Realme 3 Pro has been a very competent device in the sub Rs. 15,000/- price segment since its launch. It has very good specs and takes head to head with its competitor Redmi Note 7 Pro. While the Note 7 Pro has been on the news for the 48MP Sony IMX586 sensor for all the good reasons, Realme 3 Pro isn’t behind with its camera. The phone sports a 16MP+5MP rear camera setup. The primary 16MP sensor is Sony IMX519 which is same as OnePlus 6T. The camera quality is amazing and the camera app has Chroma Boost Mode, Portrait Mode, dedicated Pro Mode, software induced 64MP mode, Nightscape, and a 960FPS Slow-Motion video mode. Today, our topic of discussion surrounds if Realme 3 Pro 960FPS Slow Motion is fake or not.

There has been a rumor around this, so let’s find out how much of it is true. I have explained everything in details and from scratch, so only prerequisite would be: English. If you can read, you’ll understand surely. Also, read until end if Realme should be accused or not.

To know if Realme 3 Pro 960FPS Slow Motion is fake or not, we first need to know how videos are captured.

More: How to install Android Q Beta in Realme 3 Pro.

First things first, a video is a combination of still frames, played so fast that the human eye cannot detect distinct images. Hence, we think that as a motion picture or in layman’s term: video. To get an idea of how frames make videos, have a look at this.

Now, the question is how many frames do we need so that we can call it as a video? The answer is 24. FPS stands for Frames Per Second. So, to create a smooth video with undistinct frames, we need 24FPS at least. In today’s common standard, we calculate it as 30FPS. So to create a standard video, 30FPS is required. 60FPS video option makes the video smoother and of better quality. So how does this frame rate related to our topic: Realme 3 Pro 960FPS Slow Motion is fake or not?

To create a Slow Motion video, frames are stretched. If you stretch a video from 1second to 4seconds, that’ll be slower. And hence, a slow-motion video will be created. Think of it as, if you can run a distance in 10mins, and you force yourself and covered that distance in 40mins. What actually did you do? You slowed down yourself! That’s the same logic on which slow-motion videos are made.

What is the use of Frame Rates in Slow-Motion videos?

Frame rates are the most important factor in slow-motion videos. We need to understand that first to evaluate if Realme 3 Pro 960FPS Slow Motion is fake or not. Notice how we say 120FPS slow-mo or 240FPS slow-mo or 960FPS slow-mo? Why is this frame rate mentioned?

The thing is, suppose you shot a 1sec video at 30FPS. Now you want to make it slow and you stretch the video to 2seconds. Now the catch is, the video duration stretches, but we cannot create new frames! So, the frame remains 30. This 30frames which were once displayed in a duration of 1second is now displayed in 2seconds. So, what is the frame rate now? 30/2=15FPS.

As you can clearly see in the image, the initial 30FPS video when slowed down to 2seconds, or 2X, becomes 15FPS. This is when the video will become choppy or laggy. Cause to fool the human brain, you need at least 24FPS. With 15FPS, frames become distinct in our mind.

Similarly, if we stretch this same video of 30FPS to 4seconds, the frame rate becomes 30/4=7.5FPS.

Before coming to the video samples, there must be one question you’re thinking right now. “Hey man! But we record Slow-Mo in our phones and they do not lag!” Yes, you’re correct, cause there is a solution.

Now from the above images, we can see that we cannot produce stable or usable slow-mo videos. So why only Realme 3 Pro 960FPS Slow Motion is fake is the question? Slow-Mo shouldn’t even exist!

To compensate for the lower frame rate issue, what is the solution? The solution is, recording the initial video in higher frame rate!

Record a video of 1second at 60FPS, stretch it to 2seconds, and you still have 60/2=30FPS! That’s how slow-mo videos are made in the first place!

Now the Realme 3 Pro shoots the 120FPS in the 120FPS slow-mo mode. That’s why the output is fine. On the other hand, 960FPS should create a 1second video stretched up to 32seconds and still produce correct output as 960/32=30FPS!

But the fact is, Realme 3 Pro cannot shoot in 960FPS! The hardware isn’t capable enough, I guess. It shoots in 240FPS and stretches it 32X! There comes, the laggy output!

Theoretically, a 240FPS video can be stretched up to 240/30=8seconds only to produce standard 30FPS output.

Now the question comes, how do we know that the Realme 3 Pro shoots at 240FPS and not 960FPS? If you take the video in any video editing software, crop the output to 1seconds, you’ll clearly see frames between 7 and 8. Crop 2seconds and the frames are exactly 15. That brings us to the conclusion of 7.5FPS video. And of course, a 7.5FPS slow-mo video at 32X is surely shot at 240FPS initially. For a detailed look in this 240FPS topic, refer to this video [source].

More: How to install Google Camera in Realme 3 Pro.

960FPS slow-motion is a very tricky thing to achieve in mobile phones. It requires proper software and hardware support, which I think, the Realme 3 Pro lacks. Now should we become angry on Realme? I guess no. If you don’t know yet, a lot of flagships do not support 960FPS slow-mo. For example, Pixel 3XL, OnePlus 7 Pro, iPhone XS Max, Lg G8, etc. And we are talking about an Rs. 13,999/- phone here. The existence of 960FPS slow-mo is in itself a big deal. But, Realme could’ve provided a 240FPS slow-mo mode, as the phones in this price category don’t support more than 120FPS! 240FPS would make Realme 3 Pro superior nonetheless.

Also, there has been a rumor that Realme is going to push a 240FPS dedicated video mode via an OTA update. That should solve this situation. However, as a verdict, yes, Realme 3 Pro 960FPS Slow Motion is fake and is done for marketing purposes only. But as we have seen, even if we ignore 960FPS, Realme 3 Pro still remains superior to the competition in the slow-mo video department!

Do comment if you have some doubt. Until then, enjoy a cool trendy slow-mo shot by the great Realme 3 Pro.