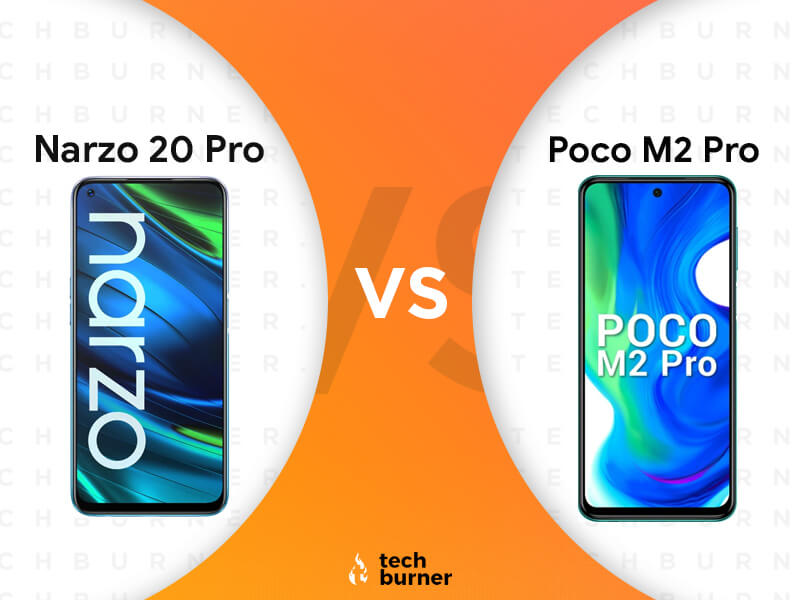 Here is a detailed comparison of both smartphones based on their Specifications and Features. Check them out below.

The Poco M2 Pro sports a 6.67-inch FHD+ IPS LCD large display with 1080 x 2400 pixels resolution. In Poco M2 Pro, we get a punch-hole design rather than the teardrop notch like many other smartphones. Moreover, the Poco M2 Pro features a 60Hz of refresh rate display. As we all want better screen protection, Poco M2 Pro has Corning Gorilla Glass 5 protection on both the front display and rear panels. However, the Poco M2 Pro does not have any IP certification to guard our phone against dust and water. Still, Xiaomi has attached a P2i certification, which makes our smartphone usable in low rain conditions.

Coming over to the battery features, the Realme Narzo highlights a standard 4,500mAh battery pack with 65W Fast SuperDart charging support. On the other hand, Poco M2 Pro features a 5,000mAh battery pack with 33W Fast charging support. We can expect that the phones will quickly charge from 0-100% in less than one hour. Let’s jump ahead to the other Realme Narzo 20 Pro vs Poco M2 Pro features.

Here are the quick specs of the Realme Narzo 20 Pro and Poco M2 Pro:

Results Time! We have looked at both the smartphone’s specifications and features. Now, it’s time to pick the best one from these two smartphones. Both smartphones have their own advantages and disadvantages. So, our ideal deal would be the Poco M2 Pro. Poco M2 Pro packs a powerful processor as compared to the Realme Narzo 20 Pro. Also, Poco M2 Pro features a bigger battery power and a powerful quad-camera setup. Moreover, we can also install Google Camera to capture more powerful and stable shots. One thing we noticed in Poco M2 Pro is the pre-installed bloatware, which might ruin your whole experience. Thus, we prefer Realme smartphones more for better user experience. If you are in the gaming battlefield, then can also go for Realme Narzo 20 Pro. The Realme Narzo 20 Pro advertisement also says that the phone fall under the budget gaming phone series. So, at last, our final deal is Poco M2 Pro.

So, we hope you all liked the Realme Narzo 20 Pro vs Poco M2 Pro: The Budget Phones Comparison. We will see you in the next ultimate comparison. Till then, “Be Safe and Be Happy”.