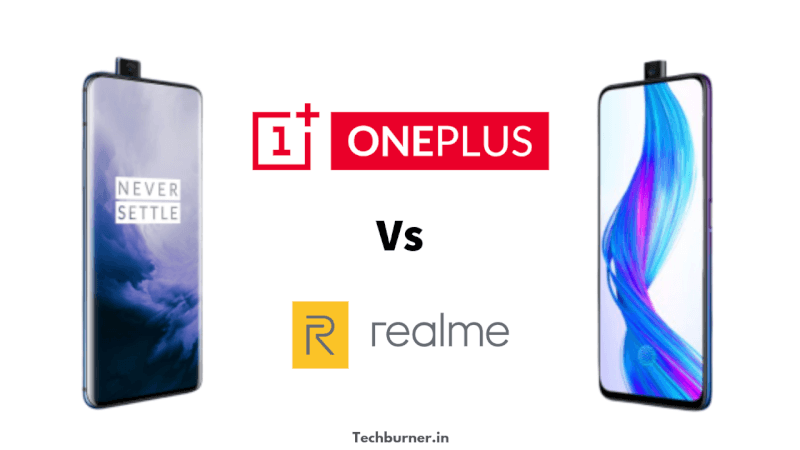 There are many similarities between OnePlus 7 Pro and Realme X. However there is a lot of difference between both these smartphones. Let’s now compare all specifications one by one.

First thing first, both the smartphones are notch-less. OnePlus 7 pro has the glass body while the back panel of the Realme X is polycarbonate one. Realme X has an edge when it comes to 3.5mm Audio Jack. The display is curved which looks more premium on the 7 Pro. Both have USB Type-C. Both the phone has the fingerprint sensor underneath the display. However 7 Pro unlocks the phone tiny bit faster than the Realme X, of course, Snapdragon 855 helps to improve the performance of in-display fingerprint sensor.

Also Read – Realme X launched with Snapdragon 710 and Pop-Up Camera at ₹15,000: Here are the details!

There is no comparison between these phones when it comes to performance. The OnePlus 7 Pro is powered by the latest and greatest Qualcomm Snapdragon 855 while the Realme X has the midrange Snapdragon 710 SoC. Realme X start with 4GB of RAM and goes up to 8GB while the top variant of OnePlus 7 Pro has 12GB of RAM! Talking about the storage, Realme X has 64 and 128GB of storage while 7 Pro has 256GB of storage, and the storage used in OnePlus 7 Pro is UFS 3.0 which helps to improve the performance.

But there is some difference on the back side. The primary sensor on Realme X and OnePlus 7 Pro is the same. The most trending camera sensor, 48MP Sony IMX586 is the primary lens on both the smartphone. Realme X has a dual camera setup with a 5MP depth sensor. 7 pro has a triple camera setup with an 8MP telephoto lens and a 16MP wide-angle lens. OnePlus 7 Pro is better when it comes to back camera. Plus, the Image processing on 855 is definitely better than the 710.

A 3,765mAh battery is present on the Realme X while a little more 4,000mAh battery power-ups the OnePlus 7 Pro. When it comes to charging speed both phones come with a fast charger included in the box. VOOC 3.0 20W fast charger comes with the Realme X while the OnePlus 7 Pro has the 30W Warp Charger. The QHD+ panel with 90Hz refresh rate will consume more battery on the 7 Pro but the Oxygen OS is very well optimised so there is no huge difference between both the phones when it comes to battery life.

OxygenOS 9.5 is definitely better than the ColorOS 6.0, there is no doubt. OxygenOS is a clean and lightweight OS which helps to improve the performance of the 7 Pro. The ColorOS also comes with many useful features. OnePlus 7 Pro is a clear winner here too.

The starting price of the OnePlus 7 Pro in India is Rs 48,999 for the 6+128GB variant. The price of Realme X starts at ¥1,499 in China which is around Rs 15,400. Indian pricing is not confirmed yet. Most probably there will not a huge price difference.

Realme X: Is this the OnePlus 7 Pro Lite? Our answer is, Yes. See, look at the similarities. Both have the same 16MP selfie camera, the screen is notch-less on both these smartphones. Also, the primary back camera is the same 48MP on both smartphones. The in-display fingerprint sensor is present on both the phones.

That’s all in this comparison between OnePlus 7 Pro and Realme X Stay tuned with us for more amazing tech articles.