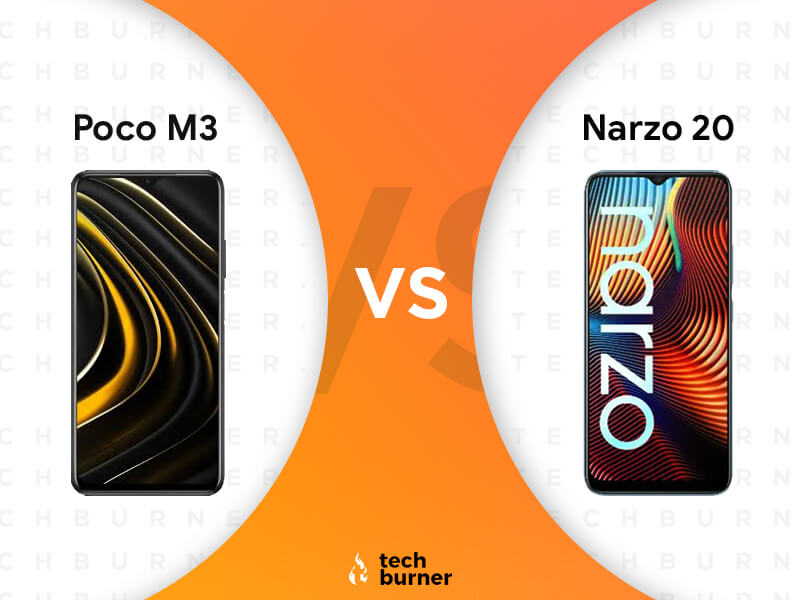 Competition is going to be tough between both brands because as we all know, Realme is leading in the budget smartphone market for a long and on the other hand, Poco has also launched some exceptional smartphones in the past few years. We know you all may be having doubts about which one you can go for. So, as of now, no need to worry as we got it covered for you, let’s start the comparison.

The Poco M3 sports a 6.53-inch IPS LCD touch display with 1080 x 2340 pixels resolution. Moreover, this device comes with a 60Hz of standard refresh rate display. Talking about its protection, it is protected with Corning Gorilla Glass 3 for a more secure experience. On the other hand, the Realme Narzo 20 sports a 6.5-inch HD+ IPS LCD touch display with a 720 x 1600 pixels resolution. Again, this device also features a 60Hz of standard refresh rate display. The Poco M3 features 400 nits of brightness. Whereas, Realme Narzo 20 comes with 560 nits of brightness, which is far brighter than Poco M3. Of course, we would be able to operate the smartphone under the sunlight, easily.
Coming over to the battery specifications, Poco M3 is backed by a 6,000mAh battery with 18W Fast Charging support. Whereas, Realme Narzo 20 also comes with a 6,000mAh battery with support of up to 18W Fast Charging and has the USB Type-C. Additionally, it supports reverse charging, which is a complementary feature to compete with Poco M3. Let’s head to other Poco M3 vs Realme Narzo 20 Features.

The Poco M3 is powered by the Snapdragon 662 based on 11nm fabrication process. This device also comes with Adreno 610 GPU for powerful gaming and multi-tasking experience. Moreover, this device runs on Android-based on MIUI 12. On the other hand, the Realme Narzo 20 is powered by MediaTek Helio G85. The device runs on Android 10 based on Realme UI, which is quite similar to ColorOS. The MediaTek Helio G85 is a gaming-centric processor. Of course, this will not provide high-end gaming satisfaction. Still, under the price, it is acceptable.
The spark comes here, as we all know Realme devices come with zero bloatware and filthy ads. But the fact is Realme has its own made applications such as Realme App Market which almost work like preinstalled bloatware. The thing is Realme does not allow users to uninstall/disable these such apps, which means we can never empty our device storage. Another thing is those Realme’s preinstalled app contains so many filthy ads. On the other hand, MIUI 12 is not also a good option too, when it comes to the user experience. Still, forsake, Realme UI would be preferable. Anyway. Read till the end to discover the winner of this Poco M3 vs Realme Narzo 20 specs comparison.

Here are the quick specs of the Poco M3 vs Realme Narzo 20:

The Poco M3 has not launched in India yet. So, we can not say much about its Indian pricing. However, the Poco M3 has been introduced in Europe with a price tag of around $149. The expected price in India would be around Rs 10,000 for the 4GB+64GB storage variant. Whereas, the Realme Narzo 20 has already been launched in India earlier. Realme Narzo 20 also comes with two different storage variants, which are 4GB+64GB and 4GB+128GB. The base variant (4GB+64GB) costs Rs 10,499 and the high-end variant (4GB+128GB) costs Rs 11,499. Now, let’s jump ahead to the last section and find out who is the Winner of this ultimate comparison between Poco M3 vs Realme Narzo 20.

Poco M3 vs Realme Narzo 20: Which One Should You Go For?

Results Time! We have looked at both the smartphone’s specifications and features. Now, it’s time to pick the best one from these two smartphones. However, our excellent deal would be Realme Narzo 20. We all know that the MediaTek Helio G85 is much better than the Snapdragon 662. Also, Narzo 20 has a better camera setup. Also, the Poco M3 Indian pricing has not been confirmed yet. So, as of now, you can go with Realme Narzo 20. And, if Poco M3 comes under Rs. 10,000, then it will be a great deal.
So, we hope you all liked the Poco M3 vs Realme Narzo 20 Specs Comparison. We will see you in the next ultimate comparison. Till then, “Be Safe and Be Happy”.