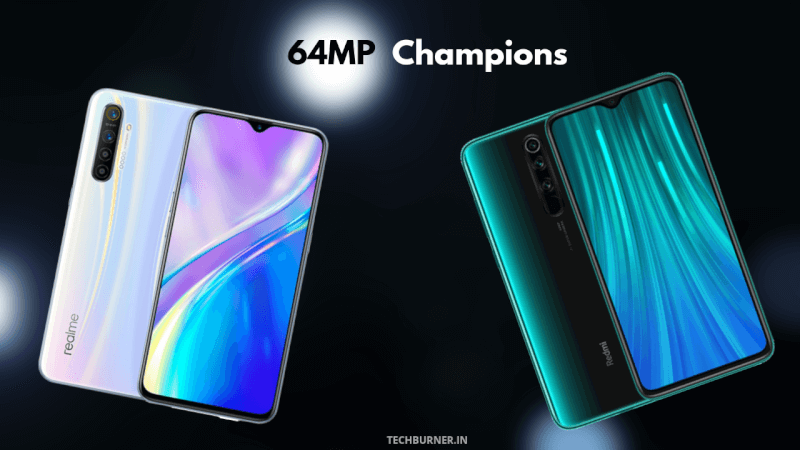 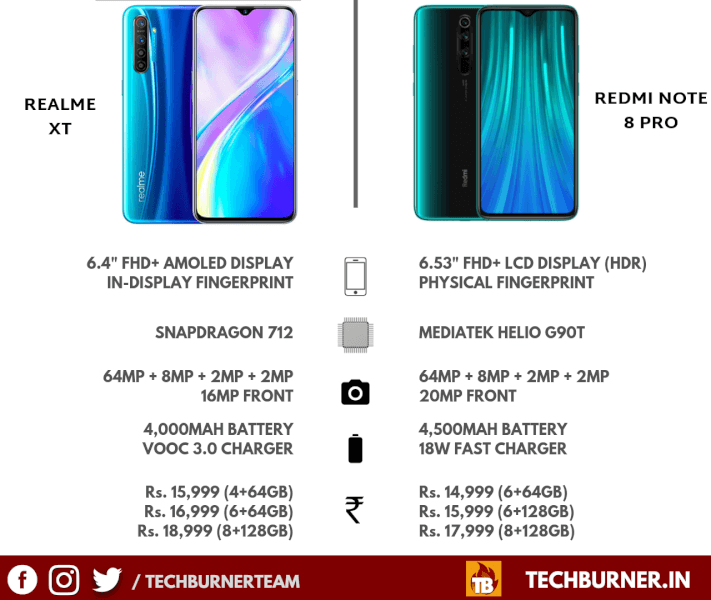 Realme XT and Note 8 Pro both are good looking smartphones. Realme XT comes in two colours, Pearl White and Pearl Blue. Three colours are available for the Note 8 Pro including, Gamma Green, Halo White, Shadow Black. Both have Gorilla Glass 5 protection on the back as well as on the front. XT is a slightly lighter phone with the weight of 183gm compared to Note 8 Pro which weighs 200gm. Realme XT is also a compact phone but 4D back glass on the Note 8 Pro helps for the better grip. So, it based on your personal preferences. USB Type-C, a 3.5mm audio jack and dual SIM card slot along with the microSD card are present on both. IR Blaster is only present on the Note 8 Pro.

Realme XT comes with a 6.4″ FHD+ AMOLED display, on the other hand, Note 8 Pro has a slightly bigger 6.53″ FHD+ Display but this display is IPS LCD. Realme XT has an edge over the Note 8 Pro due to the Super AMOLED panel. It produces punchy colours and deep blacks and it looks vibrant when it compared to LCDs. Another benefit of having an AMOLED display is in the form of In-display fingerprint sensor. Redmi Note 8 Pro has a rear-mounted fingerprint sensor. Both the display has a waterdrop notch on the top and bezels are almost similar on both these smartphones. But the Redmi Note 8 Pro’s LCD display can play HDR content, which is a nice thing. Widevine L1 certificate is present on each smartphone, so that’s not an issue at all. Corning Gorilla Glass 5 protects displays of XT and Note 8 Pro. If AMOLED panel is what you are looking for then Realme XT is the device you should go for. But you are okay with the LCD display then the panel used on the Note 8 Pro is very bright and colour accurate.

Let’s skip this point! Not really! The camera specification is almost identical. Both of them are known as 64MP Quad Camera Beasts.

As you can see in the above table that there is no difference in terms of camera specifications. However, the algorithm of each smartphone varies. Realme XT captures slightly oversaturated photos, on the other hand, Note 8 Pro’s photos have natural colours most of the times. The night mode of the Realme XT seems better than the Note 8 Pro. Portrait mode shots of both these smartphones are very good but there is an option to adjust the blur level on the Note 8 Pro which is a nice thing to have. Ultrawide angle lens also captures identical images. In the Macro lens, 2cm focal distance present on the Note 8 Pro helps to go even closer to the subject. On the front side, we have a 16MP unit present on the Realme XT while we have a 20MP unit on the Note 8 Pro. So, there is not a clear winner here, we can not choose the best smartphone under 20k based on the camera.

It’s very simple. Realme XT has a decent 4,000mAh battery and the Note 8 Pro has a slightly bigger 4,500mAh battery. No doubt, Note 8 Pro has a bigger battery but we should keep in mind that it also has a slightly bigger display which is not AMOLED. Also, the Meditek G90T is a very powerful processor and hence it will consume a little battery more battery than the Snapdragon 712. So, more or less both these smartphones will perform equally good in terms of battery. Realme XT comes with a 20W VOOC 3.0 Charger which is pretty fast. For the first time in “Note” history, Redmi Note 8 Pro also comes with an 18W fast charger in the box. Battery and charging speed is almost the same.

Redmi Note 8 Pro is far better than the Realme XT in terms of performance. The Mediatek G90T SoC used on the Note 8 Pro outperforms the Snapdragon 712 and even Snapdragon 730. Have a look at the benchmark scores.

Mediatek G90T scores around 2,80,000 in the AnTuTu benchmarking which is 70k higher score than the Realme XT. Redmi Note 8 Pro is a gaming-centric smartphone as well. If gaming is your priority then Redmi Note 8 Pro is an undoubtedly a better option for you. Both phones perform quite good in day to day usage. Redmi Note 8 Pro reportedly gets a little warm while gaming but Redmi has provided a liquid colling system to decrease the heating issues.

On the software side of thing, we are getting ColorOS 6 on the Realme XT while the Redmi Note 8 Pro runs on MIUI 10. Both smartphones run on Android 9.0 Pie and they will surely get Android 10 update in future. Additionally, Note 8 Pro will get the MIUI 11 in December (18-26).

Let’s now conclude the things. You can not go wrong with any of these smartphones. Both of them offers great value for the asking price. If your priority is a better AMOLED Display and In-display fingerprint sensor then Realme XT is the phone you should buy. But you are a hardcore gamer and want to buy a powerful smartphone than the Redmi Note 8 Pro is a better choice. Everything else including Camera performance, battery, charging speed, User interface and sound quality remains almost identical on these smartphones. At 15k Redmi Note 8 Pro is a better option in our opinion.

That was our Realme XT Vs Redmi Note 8 Pro detailed comparison. Which is the best smartphone under 20k? Let us know your thoughts in the comment section below.