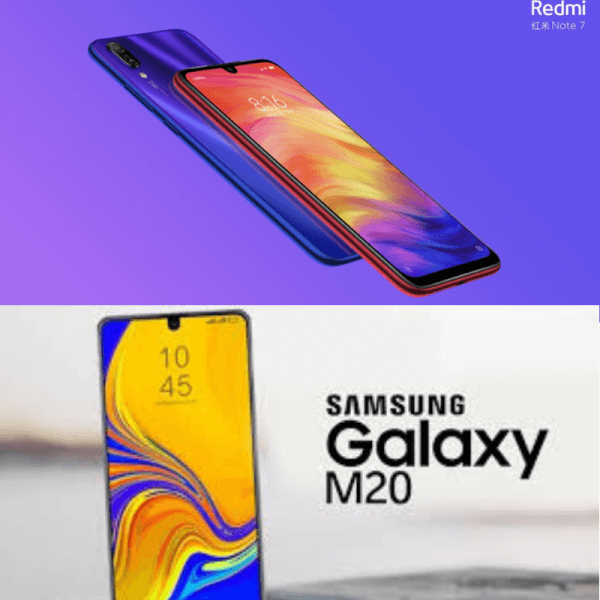 As we have recently witnessed two of the greatest mid-range smartphones, the Redmi Note 7 (to be launched soon) and the Samsung Galaxy M20, Customers looking for a device may get confused, so here is our simple specification based comparison of Samsung Galaxy M20 Vs Redmi Note 7. This article may help you  to choose from the two.

The final decision is totally up to you and your usage that which one is the best for you. Also, Redmi note 7 has not been launched yet in India, but it would launch soon.

A modern design and display is a must for phones, these days. And you won’t be disappointed by these two. Both devices have a large 6.3 inches display with a resolution of 1080 x 2340 pixels. The M20 has a TFT display and the Note 7 has got the IPS display. the screen to body ratio in both the phones is 19.5:9 with a teardrop notch. The Note 7 features a Gorilla Glass 5 back but the M20 has a polycarbonate back which makes it a bit flimsy in comparison to the Note 7. It is for sure that both the devices have a trendy look.

Both the brands have definitely understood the users’ need and have worked on it well. The Galaxy M20 has a huge 5000 mAh battery that will definitely last for 2 days or a day and a half. Note 7 lags in terms of the battery as it has a 4000 mAh battery but that will also last for about a day. Both the phones support quick charge which is next to a boon in this price bracket. Samsung will definitely win hearts in terms of battery with this phone.

Talking about the camera, Galaxy M20 features a dual-camera setup with 13 MP + 5 MP with the secondary wide-angle lens for a greater field of view. But Redmi beats Samsung as Note 7 is bagged up with a 48 MP + 5 MP and it surely takes better pictures as compared to M20. The front camera in the Redmi Note 7 is also slightly better with detailing in the pictures as compared to Galaxy M20. The camera is truly a gamechanger in this comparison.

The Reality of Performance!!!

Performance truly plays a very important role in a smartphone and both of them have worked on it this case. Redmi Note 7 has the Snapdragon 660 processor along with Adreno 512 GPU clocked at 2.2 GHz. In short, you would be able to play the hardcore games with decent performance and minimal lag. M20, on the other hand, has the Exynos 7904 with Mali-G71 MP2 clocked at 1.8 GHz which means you can play and perform other tasks at a decent level. Redmi Note 7 is slightly better than the M20 in terms of processing.

Both the devices are quite decent and it is definitely up to you to choose between the two. If you want a battery centric device, you can go for Samsung Galaxy M20 and if you want to take those beautiful shots, you can go for the Redmi Note 7.