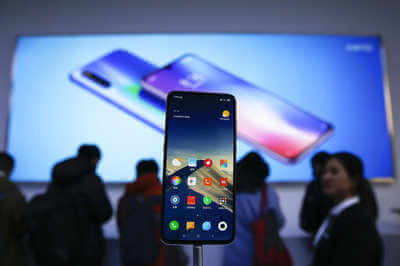 Since the Launch of Xiaomi’s Sub-Brand Pocophone, the Market of Mid-Range Flagship Devices has been Changed. Poco F1 was the first ever Phone under 25000, which had the Flagship Level Qualcomm Snapdragon 855 Chipset with Up to 8 GB of LPDDR4X RAM. After the Launch of Poco F1 in 2018, the Users are Looking Forward the new Poco F2. Many Tech Geeks are Claiming that the Redmi Pro 2, the New Redmi Flagship Device is going to be the New Poco F2. Well, until now, many Poco F2 Leaks have been Noticed. Some of the YouTubers have also shown a Photo of Xiaomi’s CEO with some Phones which are being considered as Redmi Pro 2.

As you can see in the Image, Redmi Pro 2 will have a Fully Bezzle-Less Display. Which will be Full HD+, or maybe it could be Quad HD too. Also, it’s been Heard that it will also have a Super AMOLED Panel.

Redmi Pro 2 will be a Three-Camera Smartphone and one of the Rear Cameras may have the 48 Megapixel Sony IMX 586 Sensor. Also, the Front Camera will be a Pop-Up Selfie Camera with at least 20 Megapixel Sensor.

As mentioned in the Image, the first point is likely to be written “Snapdragon 855”. So, Redmi Pro 2 can come with Snapdragon 855. But, it’s the Leak of China and in India, the Variant of the Processor may be Lowered. Nothing can be said right now. But, it’s likely Possible for Redmi Pro 2 to have Snapdragon 855 in India too.

Android Q is going to be rolled out soon and the new Redmi Pro 2 can come with the Latest Android 10.0 Q. Also, it may come with the new MIUI 11 which have been Showcased in China.

As of now, both the Pricing and Launch Date in India is not Sure. But According to Sources, Redmi Pro 2 will Cost around Rs 24,999 for the Base Variant. Price will go high According to the Specs.

As the Report says, Redmi Pro 2 Specs are as good as the Poco F2 could be. Also, there are Rumors that Redmi 2 Pro will be Launched in India as Poco F2. Nothing is Confirm now. Well, whatever it will be, the Redmi 2 Pro Specs Sounds Awesome and by whatever name it gets Launched in India, it will be Sold in a Large Number via Xiaomi’s Flash Sale 😛

Also, do you want us to Provide a Buying Guide in Flash Sales? If yes, then let us know in the Comment Section below. Thank You – Team Tech Burner 🙂