The translated tweet of Asus Indonesia says that there are many phones with the name “Pro” but are they really pro? Do they feature long-lasting battery? Do they have a strong display? And, Do they have a great camera? And how does their processor perform? This is just a taunt for the many smartphones with the name Pro in it like the Redmi Note 5/6 Pro, realme 2 Pro etc. They are trying to say that the Asus Zenfone Max Pro M2 is the “Real Pro”. This means that they are about to give improvements in display, camera, performance, and battery. 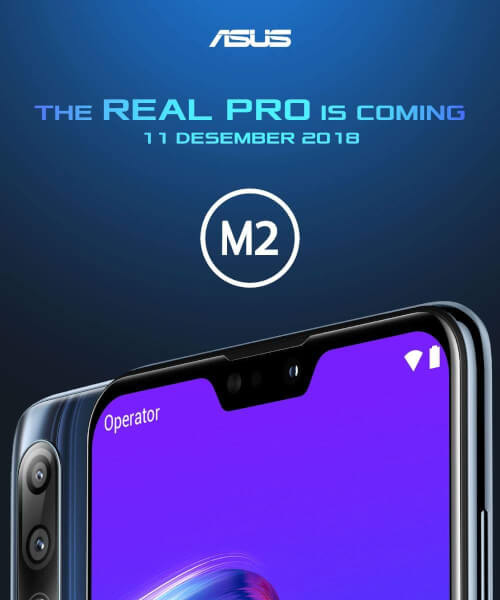 The Roland Quandt had revealed the specifications of the Asus Zenfone Max Pro M2. The phone will come with a 6-inch screen with Full HD+ resolution. The phone will have a notch on the screen that can be seen from the render tweet of Asus Indonesia. It will have Snapdragon 660 running inside coupled with 4 GB and 6GB of Ram. there have to be two storage options viz. 64/128 GB. Also, the storage expansion option has to be there. There is no wording about the battery of the Asus Zenfone Max Pro M2 but the predecessor had 5000 mah battery. So if the reports are to be believed there could be more than 5,000 mah battery in the successor.

This will feature a 13-megapixel camera in the front. And a dual camera is must in the rear but Asus will be first to introduce triple camera in this segment. From the rendered screen we can clearly see two camera sensors and a third one is also felt there. It seems that the Asus Zenfone Max Pro M2 will have a glass back too. It will have near Stock Android UI in the phone. We have seen similar UI in the predecessor Asus Zenfone Max Pro M1.

What do you think is this “Asus Zenfone Max Pro M2” going to be the Real Pro and knocking out other brands? This could be possible if we have the Triple Camera, Glass back, Stock UI, Massive battery, powerful processor etc.

Asus Zenfone 6 with a full-screen display