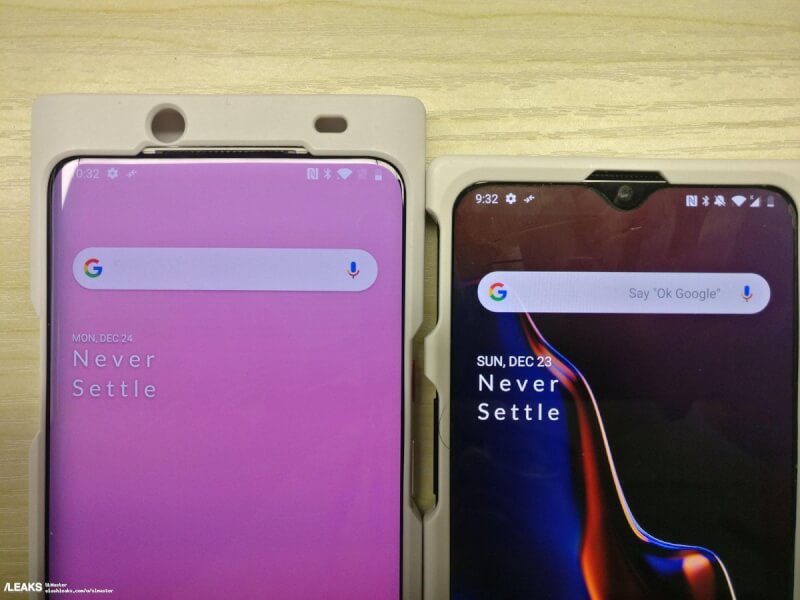 Now the upcoming flagship of 2019 is rumored to come with, OnePlus is upgrading its phone with cool and new technology like Snapdragon 855, UFS 3.0 storage, Under-display-fingerprint sensor, and 5G Connectivity. Previously, we have seen OnePlus 6, which was the first OnePlus smartphone launched with a notch display. And, the 2019 edition of OnePlus flagship is rumored to launch with Full-View display, and some cool innovation for selfie-camera.

A new leak posted on Slashleaks shows photos of OnePlus 7 & 6T running on Oxygen OS. OnePlus 7 with a sliding screen but no notch and bezelless and other device look very familiar to OnePlus 6T because of its waterdrop notch. The device on the right has display curves towards the edges with familiar to Samsung Galaxy S9. We assume that it could be the 5G variant of the OnePlus 6T with Qualcomm Snapdragon 855. 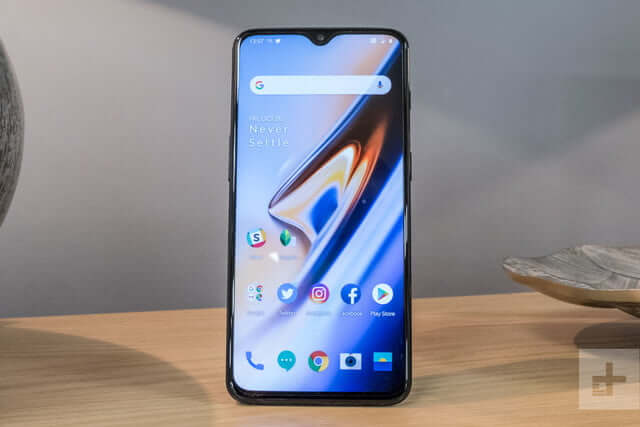 OnePlus 7 has Optic AMOLED screen with bezel-less. The pixel density 394 PPI packs with Corning Gorilla Glass V5. Its screen size will be 6.4 inches (16.26cm) capable of multi-touch. Screen Resolution of the phone is 1080×2280 pixels. With a hole-punch notch in the top.

OnePlus 7 has Qualcomm Snapdragon 855 which is 45% faster than 845 and 20% better GPU performance and dedicated processing for AI capabilities. It has 6 or 10 GB of ram with an architecture of 64 bit.

OnePlus leaks hint at UFS 3.0 storage to bring in higher data transfer speed with increased reliability for flash memory storage facility. Improvement in reading & writing speeds of up to 200%.The Sequential Read & Write speed is 2.2gb and 1.8gb per second which is very impressive. It should have 128GB,256GB, and 512GB because of UFS 3.0 of Storage.

We know that everyone needs good network connectivity. So, OnePlus 7 will be a 4G(supports Indian bands) Phone as the company has not confirmed it 5G. Stay tuned for the latest news on techburner.in.

As we know that we all want a long-life battery because these days all works of the user are mostly in their mobile phone that why OnePlus 7 packed with 4150mAh of the battery which is efficient for any user. If you forget to charge your phone it supports Warp Charge(fast charging) that will charge your mobile’s 50% in only 20 minutes by using 30-watt power.

One Plus 7 Launch Date in India

OnePlus 7 launch date has not confirmed yet but it is rumored that it will launch on May 8, 2019(unofficial).

Redmi is now a Sub-brand of Xiaomi, Rumored 48 MP Hole in Display Camera