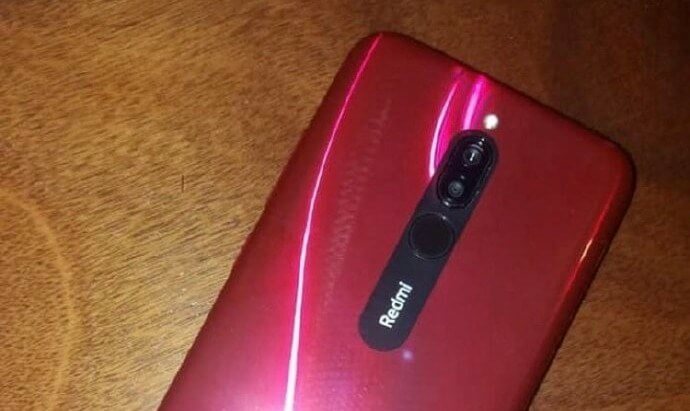 We have seen a lot of leaks of Redmi 8 series phone buzzing on the internet. Redmi has also tipped some images inviting media for their Mi A3 launch. Now, they are working on their another lineup which is Xiaomi Redmi 8A. Its live images have leaked online by Slashleaks showing a red variant of the Redmi 8A. We have already seen the leaks of upcoming 64MP Quad Camera Redmi Note 8 Pro leaks. So, its the time for Redmi 8A Leaks and Redmi 8A Live images shows some interesting feature of the phone. So, read the full article to know more about leaks, Redmi 8A Launch date in India along with Redmi 8A Price in India:

The Redmi 8A Live images were shared by Slashleaks which show a lot of information about the phone. In the above images, you can see that it has a water dewdrop notch and may feature 5MP/8MP of front camera. The device features a 6.2-inch HD+ TFT Display with a 19:9 aspect ratio. But, there is no upgrade in the display. So, the device is running on the latest Android Pie with MIUI 9.7 and is powered by the Snapdragon Qualcomm 439 SoC. Redmi 7A and comes with SD632 but Xiaomi has decreased processor in Redmi 8A. The device has 4GB RAM and 64GB ROM when “About Phone” images leaked.

Other leaks suggest that it will have 5000mAh of battery capacity. On the backside, We see dual rear camera which may be of 12MP+5MP. So, there is a fingerprint sensor below the rear camera. So, it has all the necessary features that everyone is thinking of. Therefore, pricing can matter but we are expecting that it will be a budget phone like other A-Series Phones.

Redmi 8A Launch Date in India:

The Redmi 8 was spotted on TENNA earlier this month. So, We are expecting that Xiaomi will launch it in September. Therefore, the expected Xiaomi Redmi 8A launch date in India is 27 September 2019.

Redmi 8A Price in India:

The other A-Series devices come under Rs. 8000 and there are many different variants available which differ the price. So, the expected pricing for Redmi 8A is Rs. 7999.